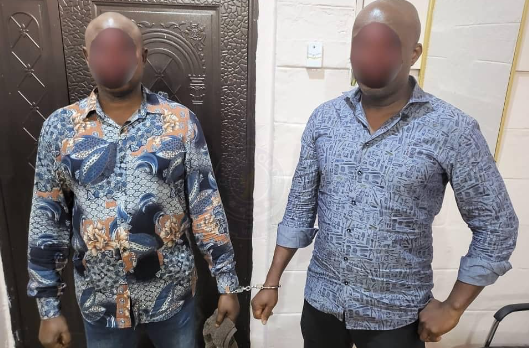 Three accused persons standing trial for gold scam and robbery were, on December 5, 2022, remanded into police custody by the court.

The accused, George Essandor Akron, owner of SSL Gold refinery, Kelvin Prince Boakye alias Don King and Joy Kwame Genu alias George ABC were arraigned at the Accra Circuit Court 10 on charges of conspiracy to commit crime, robbery and possession of a firearm without lawful authority among others.

The first accused person, Kelvin Prince Boakye was arrested on November 18, 2022, following police investigation into a gold scam and robbery incident in Accra on November 8, 2022.

Further investigation into the incident led to the arrest of accused persons Joy Kwame Genu and George Essandor Akron on November 29, 2022, and December 2, 2022, respectively.

Items retrieved from the suspects include One (1) unlicensed Bruni pistol with three (3) live 9mm ammunition, two (2) bulletproof vests, one (1) ballistic helmet, two stunt guns among others.

Accused Kelvin Prince Boakye was put before the Accra Circuit Court 10, on November 24, 2022, and was remanded into police custody to reappear on December 13, 2022.

The other two accused persons, Joy Kwame Genu and George Essandor Akron, were arraigned at the Accra Circuit Court 10 on December 5, 2022, and were also remanded into police custody to reappear on December 20, 2022.