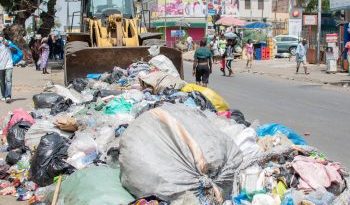 Ghana ranks among the worst in the world in sanitation. According to a WaterAid analysis (2018), over 80 percent of the Ghanaian population lacks access to basic sanitation. The Government of Ghana in 2017 established the Ministry of Sanitation and Water Resources (MoSWR) to deal with challenges in the Water, Sanitation and Hygiene (WASH) sector. Domestic financing to the ministry suggests that the Government has not prioritised addressing sanitation challenges in the country.

In 2022 and 2023, the government projected to contribute just 27 percent and 8 percent respectively to MoSWR’s budget, while donors fund the larger portion. Despite the poor domestic financing efforts, at the end of quarters 3 in 2017, 2018, and 2019, MoSWR had not received up to 82%, 90%, and 83% respectively of domestic contribution for its expenditure.

On Page 59 of the 2021 National Budget Statement and Economic Policy, Government announced its intention to roll out the implementation of the Sanitation and Pollution Levy (SPL) under the Energy Sector Levies Act (ESLA), to raise domestic revenue to combat sanitation-related challenges. Revenue generated from SPL according to the ESLA Act 1064, 2021 (amended), shall be used to:

It is important to note that all these infrastructure interventions mentioned fall under the mandate of MoSWR. At the end of 2021, Government had raised GH¢ 313,579,550 from SPL. However, no project undertaken by the ministry in 2022 was funded by the SPL Account, as is stated in ESLA Act 1064, 2021.

On Page 86 of MoSWR’s Programmed Based Budget Estimates for 2022 published by the Ministry of Finance, expenditure for re-engineering of Oti and Kpone landfill sites was funded by donors (GH¢ 42,729,749.33). There was no domestic financing for this project as indicated in the 2021 Budget Statement, and the ESLA Act. Again, on Page 84, a total of GH¢ 4 million from a domestic source (Annual Budget Funding Amount) was spent to enhance the Sustainable Sanitation Livelihoods Improvement Project, and solid waste management.

In the spirit of accountability, it is important for Government to come clear on the state of the SPL Account which is expected to contain not less than GH¢ 658 million. It is unacceptable to impose a levy on citizens for specific purposes, and fail to use the funds as required by law. Government owes the people of Ghana an explanation, especially in the wake of allegations made by former President John Mahama that Government has collateralised ESLA. Sanitation in Ghana needs significant domestic financing to improve.

The writer is an Artist & Development Practitioner