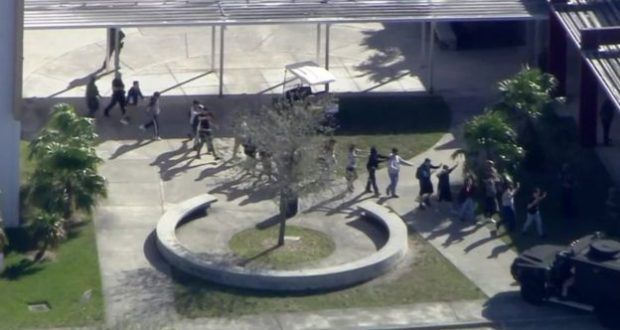 Police in Parkland, Florida, have arrested a suspect after responding to a major shooting incident at a local high school.

More than an hour after the shooting began, the Broward Sherriff’s Office said the “shooter is now in custody.”

But it warned that the scene at Stoneman Douglas High School “is still active”.

He also said the suspect was “potentially a former student… that individual, we believe, is in custody.”

“So far we have at least 14 victims,” the Sherriff’s department said, without specifying their condition.

US media outlets reported that up to 20 people may have been injured, while some have been evacuated.

A local Fox news affiliate reported seeing several people being treated for injuries outside the school.

Meanwhile, Florida Senator Bill Nelson told Fox News there were “many deaths”, citing conversations with the school superintendent, the FBI, and the undersheriff.

“The school immediately went on lockdown but is now dismissing students. We are receiving reports of possible multiple injuries,” it said.

Police were clearing students from the school “one building at a time”, the school said.

Video footage from the scene showed students being evacuated in small groups, while armed police patrolled the school’s perimeter.

As the situation unfolded, helicopter footage appeared to show a person being handcuffed and placed in the back of a police car.

Coral Springs Police department tweeted instructions to teachers and students to “remain barricaded inside until police reach you”.

The FBI also said it was attending the scene and assisting local law enforcement.

US television networks reported large numbers of parents had gathered outside the police perimeter.

One student evacuated from the school told CBS that Miami students had thought the sound of gunshots was a drill.

“We already had one earlier this morning… and then we heard gunshots; some students thought it was not that serious.”

President Donald Trump tweeted condolences “to the families of the victims”. White House Deputy Press Secretary Lindsay Walters said the president had been briefed and that the White House was monitoring the situation.

Florida Governor Rick Scott said he spoke to President Trump about the shooting, and was continuing to receive updates from law enforcement.

Congressman Ted Deutch, the district’s representative, tweeted: “I’m sick about this news from home. Just spoke with the sheriff. This is devastating.”

He said it was an “incredible school in my district – great teachers and staff, involved parents and amazing kids. Spoke with the kids there just a few weeks back.”

Students were taken by bus to a “staging area” on Heron Bay Blvd, Coral Springs, where their parents could collect them.