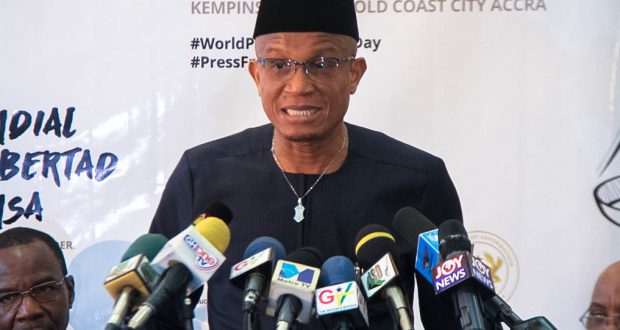 The Minister of Information Mustapha Hamid has hinted of government plans to support journalists in the country upgrade their knowledge and skills to be objective arbitrators of good governance.

According to him, the initiative will equip journalist with specialized training and skills about diverse subject areas relevant in aiding journalist to become independent and neutral arbitrators of government policies and dealing in the  ‘public court of opinion’.

Mr Hamid said situations where most journalists depended on only politicians to comment on issues bordering the country without having a fair understanding of the problems do not help the citizenry in decision making hence the initiative.

He disclosed this at a media engagement with journalists in the Upper East Region on Friday.

Even though the minister did not disclose when the initiative will commence, journalist across the country will be selected to be trained by international institutions and organisations.

“So I am begging journalist to upgrade their knowledge but on our part as government, we have resolved that we will help you in that endeavor.

we are currently in talks with so many interested international bodies and trading organizations to once a while allow us(government) to pick some of our journalist across the country for training so that journalist can get the opportunity to upgrade their knowledge”.

“Frankly, I admit that many journalists in our country cannot afford the money to undertake such training and upgrading themselves. So we believe that as a government we should have a contribution towards this course so that we can have journalists who have informed themselves and therefore capable of moderating and writing on national issues”.

Mr Hamid added that the scraping of the Parent Teacher Association (PTA) levy in the second cycle institutions by the government was to prevent heads of SHSs from using the “backdoor to charge monies that will almost look like fees”.

He also hinted that the government in the coming weeks would launch the ‘One Village One Dam’ project where hundreds of communities in the three regions of the north would witness the construction of dugouts for dry season farming.

‘I’m back’ says Schwarzenegger as he recovers from heart surgery

'I'm back' says Schwarzenegger as he recovers from heart surgery