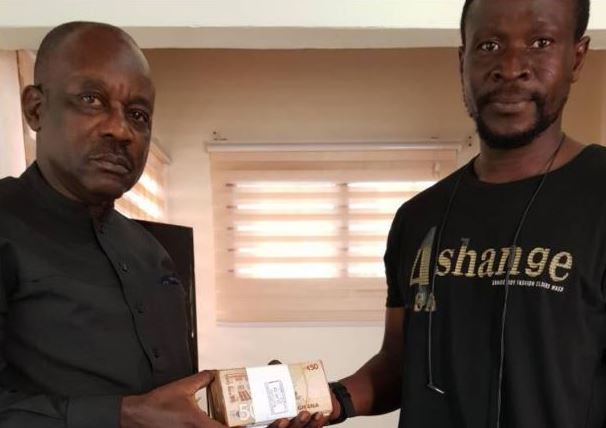 MMT Boss, Bennet Aboagye [Left] handing over GHc20,000 to Lawal [Right] in an alleged cover up

The embattled Managing Director of Metro Mass Transit Limited (MMT), Bennet Aboagye, says he paid an amount of GHc40, 000 to bait some people who tried to blackmail him.

According to him, he took the decision based upon the advice of his lawyer, Dr. Amoako Tuffour, whom he had informed of the ploy by some people to tarnish his image.

Some workers of MMT have petitioned the Special Prosecutor to investigate Mr. Aboagye over what they describe as “filthy” deals being transacted in the company.

[contextly_sidebar id=”E03x9ZIFKX0hlOdH2C9pYy8SUDj4Vn0J”]According to the petition, signed by one Mr. Lawal, who is said to be the Company’s Head of Security, the Managing Director, is in collusion with some top officials of the Company to secretly purchase 300 new buses and electrical products, and sell off MMT scrap buses.

The petition sighted by Citi News also accused Mr Aboagye and his assistant, Mr Yiadom Kessie of openly requesting “for bribes or commission before awarding contracts to suppliers or signing cheques to pay suppliers for services they rendered.”

The petitioners say they subsequently “planted a third ear at some strategic locations with the hope of having firsthand information about what the MD, his assistant and some key players in this scandal do, say and planned to do, and the revelations uncovered are mind-boggling.”

“The third ear revealed among others, malpractices involving the intended purchase of 300 buses from China…the purchase of electrical products, the sale of MMT scrap buses among others,” the workers added in the petition.

They also claimed that Mr. Aboagye, however tried to bribe them to the tune of about GHc60,000 to have the recordings and transcripts destroyed.

But in a swift response, the Managing Director of MMT, Bennet Aboagye, dismissed the allegations.

He insisted that Mr . Lawal had tried extorting about $1 million from him with the pretence of being a negotiator between him [Aboagye] and the alleged blackmailers.

Mr Aboagye said he quickly informed his lawyer, Dr Amoako Tuffour, who advised him to inform the Bureau of National Investigations [BNI].

“Dr Amoako wanted us to bait Lawal, so he proposed that instead of Lawal’s initial demand of $1 million, we should make an offer of GHc20,000.”

One of the threatening messages Mr Aboagye said he received read:

“You can alert the security agencies if you will, but that will be to the detriment of your reputation, image, your family image, business interest and the NPP party as a whole because we will unleash all our arsenals on you and Mr Yiadom Kessie, etc.”

He said after several meetings, Mr Lawal told them that the supposed blackmailers had agreed to accept GHc40,000 and hand over all the recordings and the “supposed third ear.”

“All this while, Lawal was trying to portray that he was only playing an intermediary role and that he was innocent and rather intervening on our behalf. According to him, it was a group led by one Bawa which was behind this deal. It is important to note that, the said Bawa once called Mr Kessie on the phone and threatened him to pay the money, else, he would regret the consequences of failure to comply,” Mr Aboagye said in a memo sighted by Citi News.

“Dr Amoako Tuffour called me that the security coordinator [Lawal] was now prepared to give us the recordings and to take his balance. For that purpose, we should meet in his office at East Legon at 9:00 am.”

He wrote in the memo that, while at Dr Tuffour’s office, “Lawal only presented a pen drive to Mr Yiadom Kessie.”

“Initially, Dr Amoako Tuffour rejected the pen drive and demanded to have the entire recording device. Lawal then promised that having received the full amount in hand now, he would present it to his ‘people’ and return by 5:00 pm with the full recording device.  After offering the final balance of GHc20,000 to Lawal, Dr Amoako Tuffour himself took pictures of the money being handed over to Mr Lawal as evidence. Since then, he never showed up.”

Mr Aboagye, however, insisted that “this is a clear case of extortion and blackmail by an employee.”

Meanwhile, Citi News can confirm that the Special Prosecutor has received the request.

Our Sources say the Special Prosecutor has responded to it, saying the Office will investigate the allegations once it starts work.