CEPS to get 5,000 support staff from NaBCo 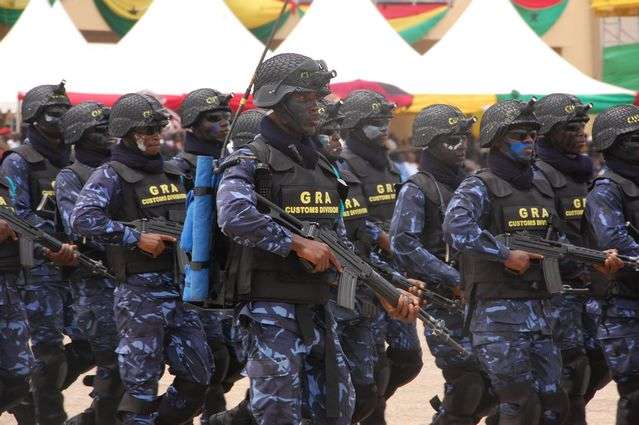 The Commissioner of the Customs Excise and Preventive Service (CEPS), Isaac Crentsil, has disclosed that his outfit will engage about 5,000 graduates who will be recruited under the Nation Builders Corps Programme (NaBCo) to provide some support services.

This, he explained, would go a long way to augment the staff strength of CEPS and improve their work at the various checkpoints within the country.

[contextly_sidebar id=”mSK4MZBhAMMsgMRYjvk8INXEsvWlSBjK”]He admitted that the service had inadequate staff to man the various entry points of the country.

He said despite the challenges, his outfit was doing its best to effectively carry out its mandate.

The Commissioner of CEPS was speaking to the media in Sunyani on Monday as part of his week-long working visit to the Brong Ahafo region to see, first hand, the challenges facing staff in the discharge of their duties as well as to commend them for their high sense of professionalism and dedication to work despite the challenges confronting them.

“It is important for me to meet and interact with staff under service in the regions to know at first-hand what their challenges and how we can collectively strategize to address them”, he emphasized.

He noted the paperless system introduced at the Tema Port was working efficiently and helping the country to achieve its target of non-human interference in debt clearance, reduction in the cost of doing business and has improved revenue collection in the country.

On smuggling, he blamed the situation on a lot of unapproved routes and said with the collaboration between CEPS and the Ghana Immigration Service (GIS), the success is being recorded in checking revenue losses and cross-border crimes.

He mentioned cocoa, rice and cooking oil among the products there were often smuggled into the country and urged staff at the borders to be vigilant.

“We have a Mobile National Taskforce to argument what is being done at the borders and entry points to ensure the country is secured at all times.”

He warned officers against unprofessional acts and charged them to be fair in their dealings with all persons irrespective of their political affiliations to build trust and confidence in society.

He, therefore, appealed to the public and traditional authorities to provide the service with timely and relevant information to enhance the fight against smuggling and cross-border crimes.

The Commissioner disclosed that his outfit was collaborating with the neighbouring countries for the exchange of information since security was a shared responsibility.