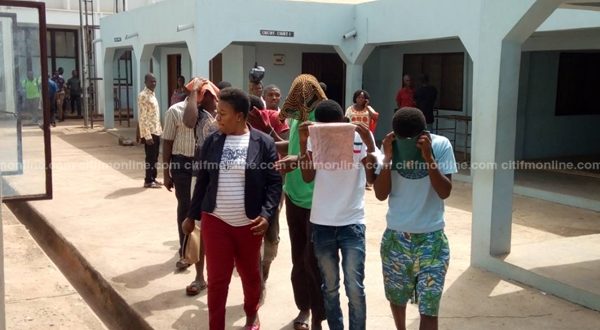 A circuit court in Kumasi has sentenced one of the suspects in connection with the Bantama rape case to seven years imprisonment.

According to the court, the suspect, Ernest Asare, 20, was the only adult among the five suspects when the crime was committed.

[contextly_sidebar id=”Okl8L3u1kmM2tQZc6eRszsXNGG6CFuVC”]He was found guilty of defilement and conspiracy to defile.

The court presided over by Her Honor Comfort Tasiame has referred the four other suspects who have been charged with abetment to commit defilement to the juvenile court for their respective sentences.

Yahaya Seidu, one of the lawyers for the accused persons, said they were disappointed with the judgement.

He said although they produced ample evidence to back their claim that Ernest Asare was also a juvenile, the court found it insufficient.

For the other boy, the court said even though evidence was produced he was a juvenile, it was not satisfied with the evidence so he was convicted is an adult and the sentenced to 7 years imprisonment.

We are disappointed. We did our best as lawyers but at the end of the day the court said they are guilty… We believe that after going through the full judgment, if there is a way out, we will take the option with the consent of the parents of our client.

He said the four other suspects are currently in the custody of the juvenile home and will be transferred to the juvenile court for later sentencing.

In December 2017, many Ghanaians were left outraged after a viral video showed about five young boys holding down a young girl and forcibly having sex with her.

Three suspects were initially arrested, but more were arrested later. The victim, who was found to be 18-years-old was later given medical and psychological help by the Domestic Violence and Victim Support Unit (DOVVSU)  of the Ashanti Regional Police Command and the Komfo Anokye Teaching Hospital.