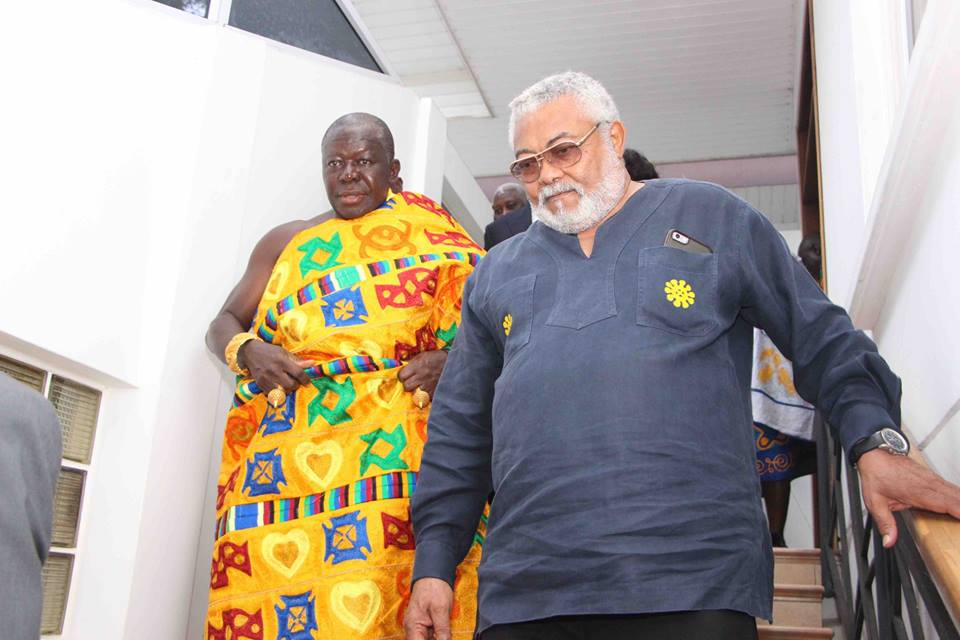 Rawlings and his wife, Nana Konadu Agyeman-Rawlings, praised Otumfuo and the Okyehene, Osagyefo Amoatia Ofori Panin II for their show of statesmanship at the durbar of chiefs held in Kyebi on Thursday.

[contextly_sidebar id=”t04XWL9h8wEz44hiugleD2t5BTXinhho”] The two said the atmosphere of unity and reciprocity exhibited by the eminent traditional rulers was inspirational and a great motivation for national peace and cohesion. 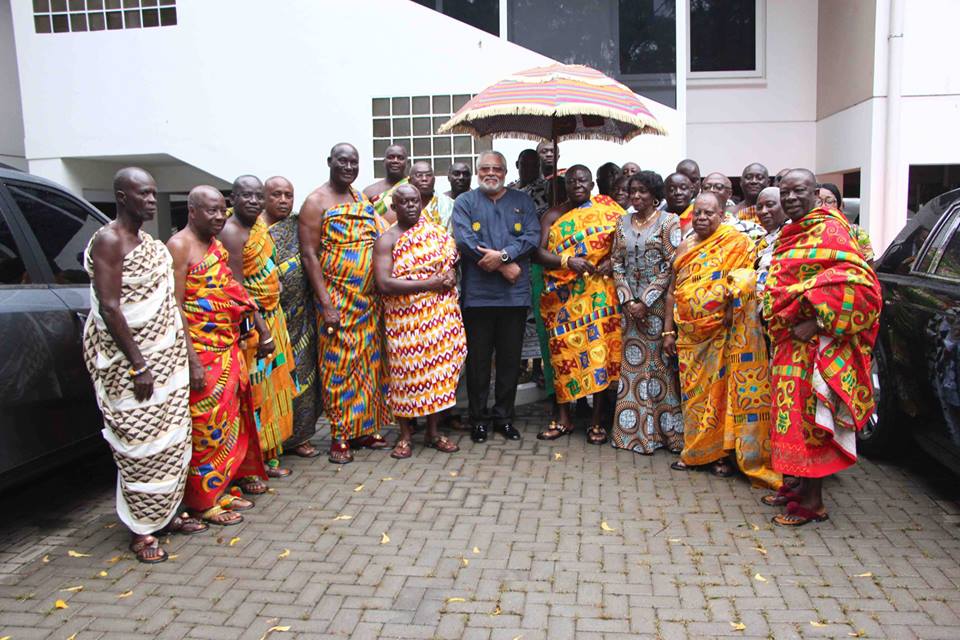 Flt Lt Rawlings and Mrs. Rawlings made the comments when Otumfuo Osei Tutu II and a delegation of chiefs called on them.

The former President said the gestures by the two traditional rulers had put the brakes on those who tend to take negative advantage of the healthy rivalry between the two kingdoms. 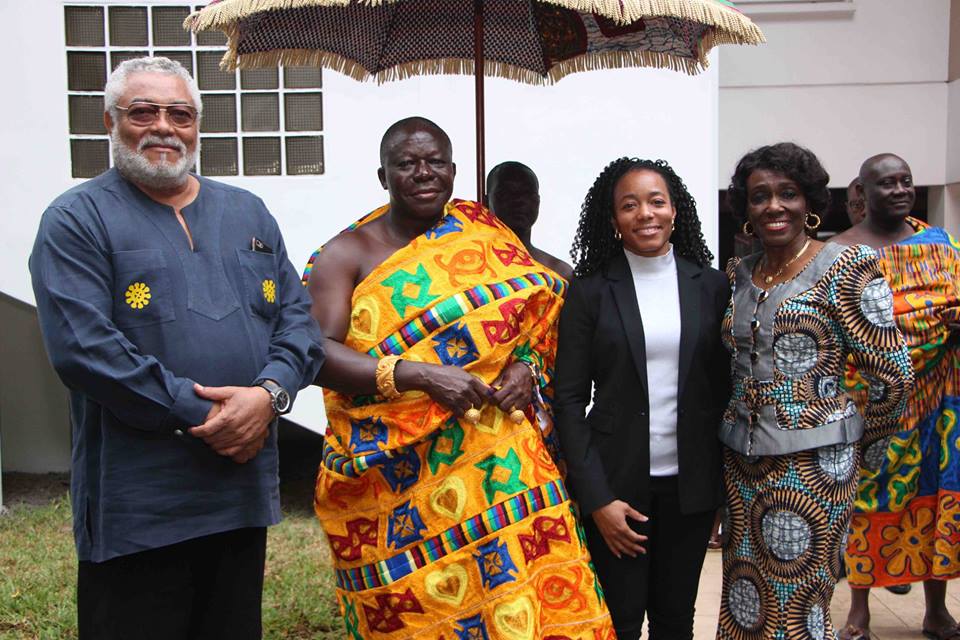 He noted that there are some whose interests are parochial and not nationalistic as opposed to those whose pursuits are always patriotic and all-embracing, stating that the two leaders had chosen a path that will send a strong signal of unity to all Ghanaians.

Nana Konadu Agyeman-Rawlings commended the Otumfuo and the Okyehene for the tone of their addresses at the colourful durbar which was attended by President Akufo Addo, leading politicians, business people and a cross-section of Ghanaians as well as international guests. 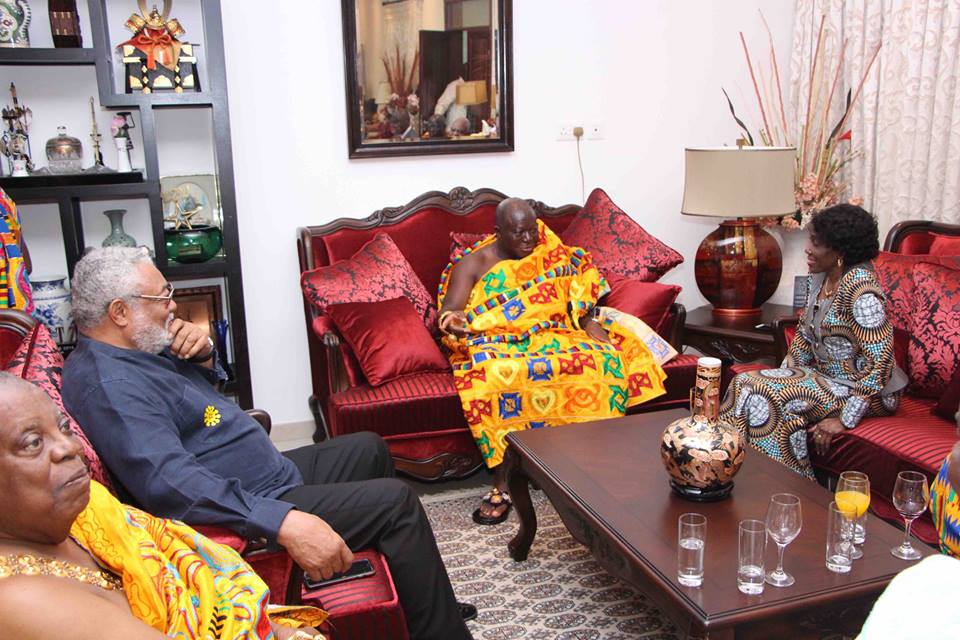 She stated that the addresses were inspiring, passionate and aroused a sense of patriotism and nationalism that was electrifying.

The Otumfuo had earlier paid a courtesy call on the President.

Asantehene Otumfuo Osei Tutu II, and his counterpart, Okyenhene Osagyefo Amoatia Ofori Panin, cleared the air with regards to the seeming tension believed to have existed between the two powerful and influential traditional areas in the country.

At the colourful ceremony of the 75th anniversary celebration of the first Okyenhene, Nana Sir Ofori Atta I, held at Oforipanyin Fie in Kyebi, Otumfuo Osei Tutu II, the overlord of the Ashanti Kingdom for the first time in history visited the Abuakwa Traditional Area in a grand style with over 500 people including his sub-chiefs, other traditional leaders, and staff at the Manhyia Palace making up his entourage.

About the late king

Earlier in August, Chiefs, Queen mothers, Elders and people of Okyeman both home and abroad launched the 75th Anniversary celebration of the late King of Akyem Abuakwa, Nana Sir Ofori Atta I.

The event took place at Ofori Panin fie, under the auspices of Osagyefo Amoatia Ofori Panin, and was highly attended by all divisional chiefs and queen mothers within the Abuakwa Traditional Area.

Nana Ofori Atta was Omanhene of Akyem Abuakwa from 1912 to 1943. He was also the longest-serving African on the Legislative Assembly (then the de facto Parliament) of the Gold Coast”.

He is the first traditional ruler to establish a stool treasury from which he funded and founded the Abuakwa Scholars Fund, the establishment of the first Government trade school as well the Abuakwa State College popularly called ABUSCO”.

The 75th Anniversary of his death in 1943, seeks to remember, reflect and reclaim the many achievements in his memory.

How to overcome shyness? 10 Great tips

How to overcome shyness? 10 Great tips