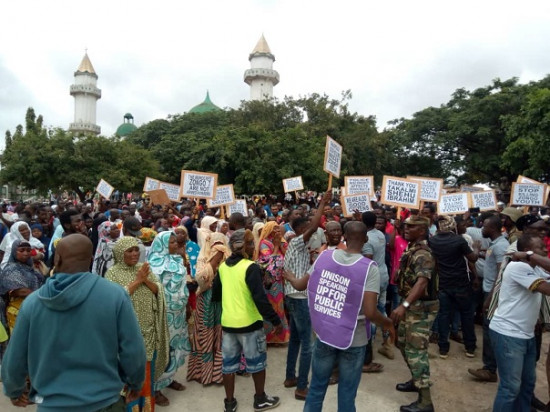 The Independent Committee set up to investigate the police killing of the seven Zongo youth in the Ashanti Region, has submitted its report to the Vice President, Dr. Mahamudu Bawumia.

The report was submitted to the Vice President today, Wednesday, 26th September, and has subsequently been forwarded to the Attorney General’s office for the necessary steps to be taken.

[contextly_sidebar id=”Mmu5lsoxST8TxCYStfB8t236vPrDua1A”]In a statement signed by the Alhaji Abubakar Saddique Boniface, Minister of State at the Office of the Vice President,  he said “government wishes to have the matter resolved as soon possible.”

The statement explained that the setting up of the independent committee was necessitated by the differing versions of the circumstances leading to  the shooting and the killing youth in Asawase.

“Government wishes to have the matter resolved in a short time as possible. We wish to once again express our condolences to the bereaved families and to assure that no effort will be spared to bring closure to this unfortunate incident,” the statement said.

Protests over killing of 7 Zongo youths

In July this year, hundreds of youth from the Zongo community trooped to Kumasi Central Mosque to register their displeasure over the killings of the seven youth.

The Police in a media briefing on the death of the youth said the young men were killed because they were armed robbers who exchanged fire with them.

However, relatives and friends of the seven  accused the police of planting guns to frame the deceased persons after they had been gruesomely killed.

They insisted the seven men were not robbers, and yet were painfully killed.

The Zongo community in Kumasi has in the past had cause to complain over perceived stereotyping that has led to the killing of multiple Zongo youth over the past few months.

The leadership of the Zongo community in the Ashanti Region had vowed to rise against these killings. They had been piling pressure on government to release the report.

The Member of Parliament for Asawase Constituency in the Ashanti Region, Alhaji Muntaka Mubarak, had recently warned that the Zongo Community, could run out of patience if the independent committee investigating the killing of the seven young men did not expedite the process and issue its report.

According to him, relatives of the deceased and the entire community are anxious to know the outcome of the committee’s report, and so any further delay may spark an uproar in the area.

5 out of seven buried so far

Five out of the seven deceased Zongo youth, suspected to be victims of police brutality in the Ashanti Region have been laid to rest.

It was a moment of grief as relatives and sympathizers of the deceased could not hold back their tears as four ambulances brought the bodies from Komfo Anokye Teaching Hospital.