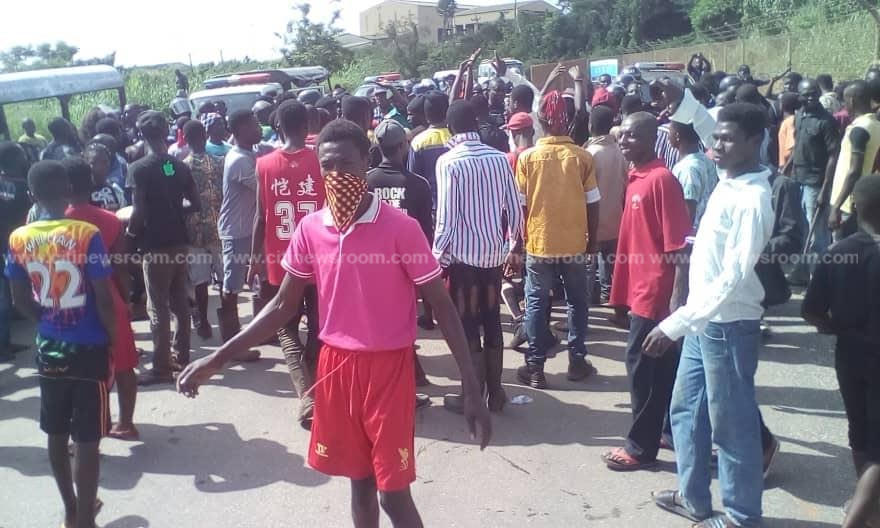 Six farmers in the New Abirem District who sustained gunshot wounds during a demonstration against mining firm, Newmont Gold, have been discharged from the New Abirem Government Hospital.

One other farmer, who was sent to another facility has also been discharged.

They were part of a group of farmers in New Abirem who staged a protest against the management of Newmont Akyem Mines over compensation packages on Tuesday.

The seven sustained wounds from rubber bullets and tear gas fired by police in a move to disperse the agitating farmers.

[contextly_sidebar id=”zc1OfCm7nJqnm6bfsCDIjCBT5I7q3CPo”]In an interview with Citi News, the Medical Superintendent of the New Abirem Government  Hospital, Dr. Attah-Larbi Sakyi, said all the injured farmers are in good condition and have been treated and discharged.

“On Tuesday, around seven in the morning a minibus rushed three men to our Out-Patients’ Department. Apparently, they had sustained injuries from a demonstration exercise around Newmont Akyem Mines area. They were reviewed and it was a case of minor abrasions with some burnt injuries so we assessed them well and treated them”.

“We then admitted them and sent them to the wards for further observation, so later on another three men were also brought in with the same degree of injuries and they were also treated and taken to the ward. I must add that they were all conscious and alert and not in a critical condition as being speculated”.

Dr. Attah-Larbi Sakyi then debunked speculations indicating that one of the injured farmers who was on admission had passed on.

“In all five, were placed on admission and one was treated and discharged on Tuesday, as I speak, those five who were on admission have been discharged to their homes pending weekly reviews. The results from the x-rays conducted on them revealed no fracture, but I must be quick and add that we heard from other radio networks that the farmers brought in here were in critical conditions and referred to the Koforidua Central Hospital, where even one of them has passed on. But I want to debunk that because all of them are doing perfectly well and in good condition because I personally discharged them all this [Wednesday] morning”.

Farmers injured in demo against Newmont

Farmers in the mining area have been agitating over the past three years for a compensation package from Newmont Ghana following the takeover of their farmlands.

E/Region: REGSEC to meet over farmers protest against Newmont

The Eastern Regional Minister, Eric Kwakye Daffour, has called for calm while his outfit convenes a meeting to engage farmers, management of Newmont and other stakeholders to resolve the current impasse.

Speaking to Citi News, Mr. Daffour was hopeful that a lasting solution will be found.

He noted that he together with other members of the Eastern Regional Security Council (REGSEC), will meet the stakeholders to iron out the issues.

Farmers were fairly compensated; they should allow the court to decide – Newmont

Newmont Ghana has reaffirmed its commitment to fully engage with farmers in New Abirem to address concerns over their compensation packages.

“We all very committed to engaging with all stakeholders. It is part of Newmont’s core value to engage with our communities and honour all our obligations to stakeholders. We look forward to a peaceful and amicable resolution of this issue. Whatever the court system decides, Newmont will abide by the court ruling.”

‘Farmers were not cheated.’

Ama Bawuah further indicated that though the farmers were fairly and fully adequately compensated, they decided to stage a demonstration demanding extra compensation packages.

“We engaged the land valuation board. We engaged with a reputable community valuer that was based on the agreement with all stakeholders, and we compensated fully and fairly, and the farmers decided to come back. They decided that the compensation they were paid was not enough, so they decided to come back. They have taken the issue to court based on their position on the matter, and we believe the court system will issue a judgment on their operation.”