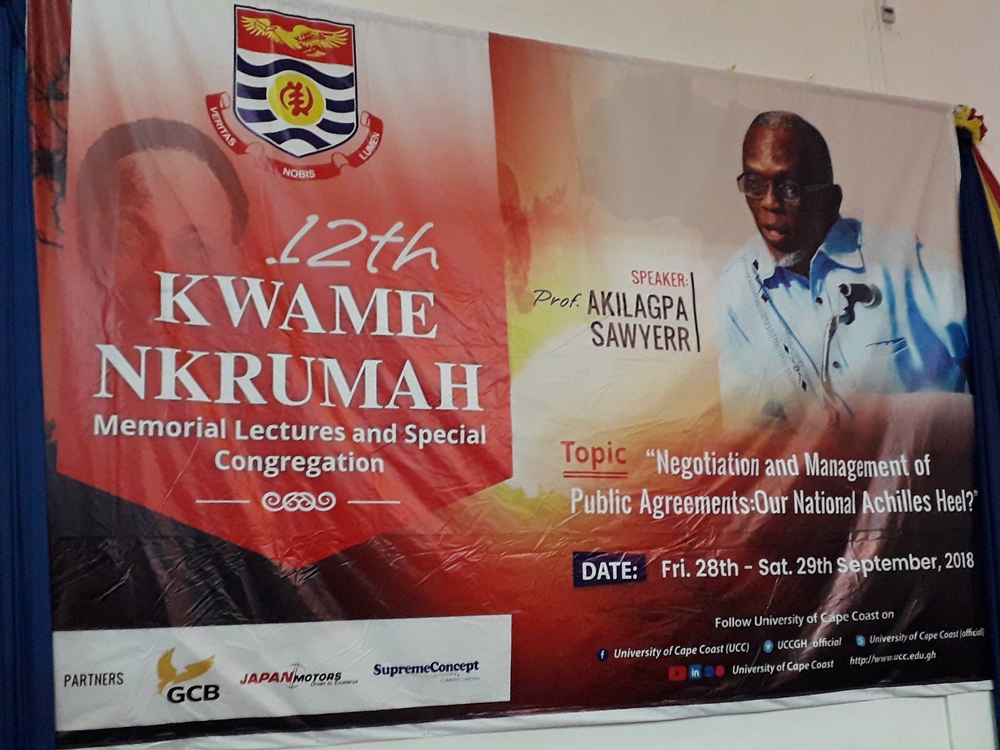 Prof. Akilagpa Sawyerr has said Ghana stands the risk of possible lawsuits from AMERI Energy and Greece-based Mytilineos International Trading Company over of the botched AMERI contract that is undergoing a controversial review.

Though Parliament is yet to approve the reviewed AMERI contract, which would have cost the country some annual payments of $75 million for fifteen years, Professor Sawyerr says the complexity of the contract could result in legal tussles.

Describing the collapsed deal as an “embarrassment,” he said, “the question arises, in view of AMERI’s denied involvement, how do we proceed with the new agreement? Will that not expose us and likely a legal challenge by AMERI for terminating both agreements; or if we don’t go ahead with the arrangement, a challenge by Mytilineos Company for not executing the new agreement, or both of them?”

Prof. Akilagpa Sawyerr expressed the fear in his second lecture titled ‘Can We Not Do Better?’ at the 2018 12th Series of Kwame Nkrumah Memorial Lectures at the University of Cape Coast on Saturday.

The two-day 12th Series of the Kwame Nkrumah Memorial Lectures (2018), was titled ‘Negotiation and Management of Public Agreements: Our National Achilles Heel?’

Speaking on the need for Ghana to improve its business agreement negotiation competence, Prof. Sawyerr called for the inclusion of experts in negotiations.

He said Ghana should have the procedures and guidelines for negotiating national business transactions, noting that what currently prevails is crude and ineffective.

“Whatever we do, (we) should allow technical people to lead in technical matters, from engineering, finance, law, agriculture, let expert opinions lead in such matters,” Prof Sawyerr argued.

The occasion of the lecture was also used to confer an Honorary Doctorate Degree on Prof Akilagpa Sawyerr by the University of Cape Coast at a congregation by the Chancellor of UCC, Prof. Sam Jonah, and witnessed by the chairman of the university council, Mrs. Nancy Thompson.

The Executive Director of the Africa Centre for Energy Policy (ACEP),Bernard Boakye, has asked Parliament to reject the renegotiated AMERI deal.

Government is seeking to amend the controversial 510 million dollar power deal approved by the House in 2015.

Mr. Boakye on Eyewitness News rubbished claims Ghana will be saved a whooping $400 million under the renegotiated deal, saying “We are committing to pay $50m for 15 years which is not on for the Ghanaian public and I hope Parliament will protect the public by rejecting the AMERI amendment,” Mr. Boakye said.

His comments came at a time when the Minority in Parliament had asked government to provide details on the cost of the amended agreement.

About the Ameri deal

The then opposition NPP was critical of the deal, and the Energy Minister, Boakye Agarko, claimed that it had been overpriced by 150 million dollars.

The NPP MP for Andasi-Asokwa, K.T.Hammond had earlier filed a motion for a rescission of the deal.

The Minority however staged a walkout when the Speaker forwarded the motion to have the deal rescinded in Parliament.

The John Mahama administration in 2015 signed a contract with Africa and Middle East Resources Investment Group’s (AMERI Energy) to rent the 300MW of emergency power generator from AMERI at the peak of the country’s power crisis.

The new administration thus commenced a renegotiation process to ensure value for money. But the NDC has repeatedly stated that the claims are untrue.

We gave Ghana best deal; but gov’t can scrutinize – AMERI

The Africa & Middle East Resources Investment Group LLC (AMERI) had also stated that, its 2015 agreement with Ghana for the provision of a Power Plant in the heat of the country’s power crisis, offered the “best value for money” despite government findings that the $510 million deal was bloated by $150 million.

“AMERI acknowledges that the Government of Ghana has every right to assess all public contracts for value of money or quality of delivery. The company strongly believes the project delivered on both. An independent report by renowned auditors PriceWaterhouse Coopers (PwC) found that, out of 7 similar projects, the Ameri plant at Takoradi offered the best value for money,” the statement said.