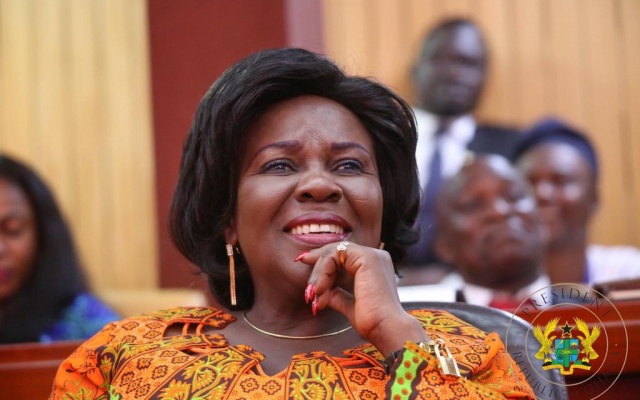 Cecilia Dapaah is the Minister for Sanitation

The Ministry for Sanitation and Water Resources, has announced that the Kpone landfill site in the Tema Metropolis of the Greater Accra Region, will be undergoing a rehabilitation to be able to take more waste as volumes of waste increase.

[contextly_sidebar id=”hKVHBBfH6a8JX0yaUUfYsCGbpNpnjukj”]In a press statement, the Ministry said additional cells are to be added to accommodate the large volumes of refuse the site receives on a daily basis.

There have been several complaints from the people of the Kpone  Katamaso Municipal Assembly, particularly the Kokompe community, about the awful stench that emanates from the site when it rains.

The sector Minister, Cecilia Abena Dapaah on a visit to the site together with her two deputies, Micheal Y. Gyato and Patrick Yaw Boamah, on the September  11, expressed concern about the poor management of the site.

She thus directed the operators of the site to manage the facility properly to avoid any outbreak of an epidemic in the community.

The Greater Accra Regional Minister, Ishmael Ashitey, has said the limited waste disposal sites in the national capital are hampering government’s agenda of making Accra the cleanest city in Africa by the end of Nana Addo’s first term.

According to him, the only landfill site available, the Kpone landfill site, is unable to contain the amount of waste generated in the city each day.

“We have only Kpone landfill site which is working. One problem we have is how to dispose of the waste. Now our waste disposal sites are not sufficient, and so we are thinking of the use of technology to manage this. So many people have come forward and very soon, others will start turning the waste into other things. If we do so, then our cities will become cleaner,” he said.

The Tema Sanitary Landfill site, which is the only Engineered Landfill facility in the Greater Accra Region was commissioned in January 2013, and is designed to receive 500 tonnes of refuse per day.

However, due to inadequate number of disposal facilities within the Greater Accra Metropolitan area, close to 1,000 tonnes of refuse is dumped daily at the site.

It is estimated that the landfill site will be full in the next six months as a result of the high volumes of waste it is currently receiving.

In view of the current situation at the site, the Ministry is currently going through the process of constructing additional cells to prolong the life span of the facility.

Records available indicate that the Greater Accra Metropolitan area alone generates over 3,000 tonnes of waste daily, out of which the Tema Sanitary Landfill receives one third.

The facility is managed under a management Contract by a private service provider with the Tema Metropolitan Assembly, which operates 24 hours from Monday to Saturday.