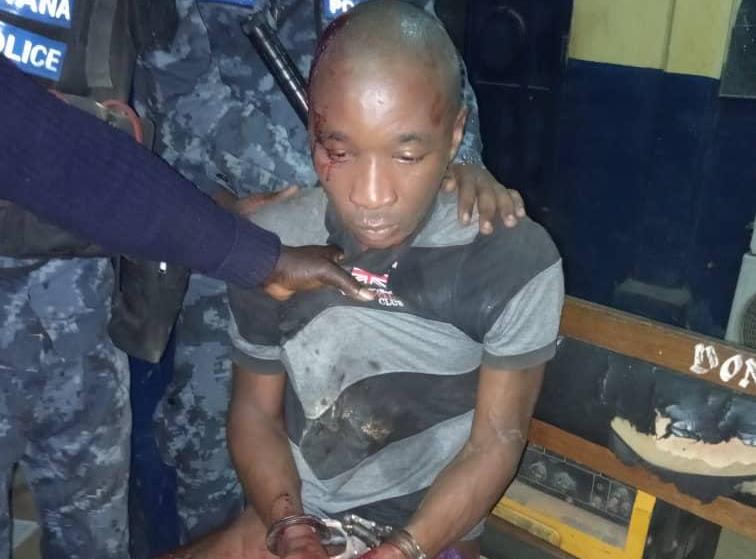 Samuel Udoetuk Wills, a suspected Nigerian kidnapper who broke cell last Sunday from the Takoradi Central Police Command has been rearrested this dawn by three police personnel at Nkruful near Takoradi.

The suspected kidnapper, who was being investigated for allegedly kidnapping three teenage girls around the Sekondi-Takoradi Metropolis, managed to escape from police cell on 30th December, after cutting the iron-rods in the ventilation windows of the cell.

“The suspect was arrested this morning at 1:00am. The Police had information that the suspect was hiding in an uncompleted building at a spot between Nkroful and Kansawurodo, and indeed he was located and rearrested. Whiles the police was bringing him, the residents wanted to lynch the suspect but we called for re-enforcement and managed to take him to the station”.

On the progress made in locating the whereabouts of the kidnapped girls, DSP Olivia Adiku, Oaid: “when the suspect was interrogated, he mentioned that he was working with one John in Accra, so the command is escorting him to Accra to help locate the said John and the victims”.

The 28-year-old suspected kidnapper’s re-arrest comes after the Takoradi Central Police Command in line with police procedures charged police personnel who were on duty on the day of escape to produce the escapee within ten days.

The officers according to the PRO, will still be interrogated although they themselves recaptured the suspect.

DSP Adiku said “ when you are on duty and somebody escapes, you are given ten days to search and recapture the suspect. The suspect has been recaptured, but they are still looking into it, thus the role they played. If it is found out that indeed they didn’t play any role, they can still be charged with negligence on duty  that resulted in the suspect’s escape. So though the suspects have been recaptured, the officers are still not free”.

Meanwhile, Nana Adjoa Quayson, whose 18-year-old sister, Ruth Quayson is a victim of the Kidnapper in a reaction told Citi News that she is happy about the rearrest.

She added that “all we want right now is for our sister and the other girls to be brought back to us”.