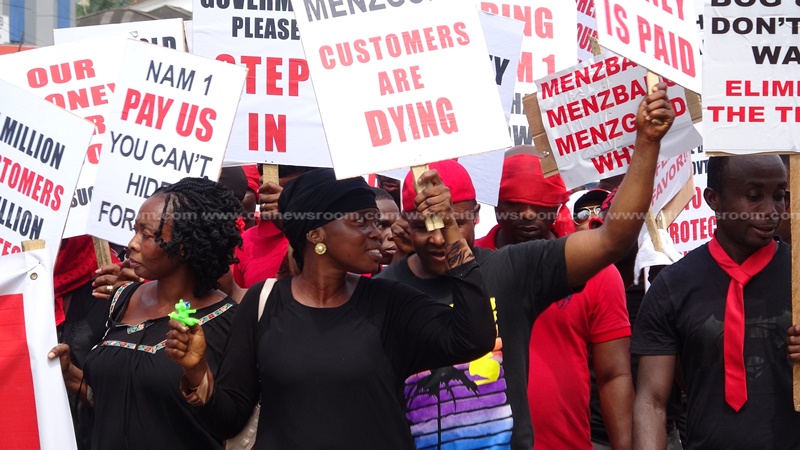 Some aggrieved customers of the defunct gold dealership firm, Menzgold Ghana Limited say 15 people in the group have died.

According to them, the deaths are as a result of their inability to retrieve their monies from the troubled firm.

[contextly_sidebar id=”j4jxg8QyDbaRR2mNRFsVIJN5VvGCZTAL”]In a statement, the customers say they will picket at the premises of the Economic and Organised Crime Office, the Attorney General’s office, and the Jubilee House to press home their demands.

Frederick Forson, a member of the coalition of aggrieved customers of Menzgold told Citi News, the government must furnish them with details of work being done to retrieve their monies for them.

“We want the government to tell us about the work they are doing in respect of our locked up funds.  According to EOCO, they are more or less finished with the work that they are doing. It is left with the Attorney General who has the power to go to the court for a litigation order.”

The coalition of aggrieved customers of gold dealership company, Menzgold has already said they will not relent in their efforts to retrieve their monies from the company.

According to the customers, although no significant progress has been made in their quest to retrieve their cash.

The President of the coalition of aggrieved customers of Menzgold, Timothy Binob, said they will protest until their monies are retrieved.

President Nana Akufo-Addo has also said the woes of troubled gold dealership firm; Menzgold Ghana should be a wakeup call for all Ghanaians.

In what he described as a tragic phenomenon, President Akufo-Addo admonished the citizenry to be wary of deceitful investments schemes to avert similar occurrences in the future.

“As the authorities try to unravel the intricacies of what happened (in the MenzGold saga), I admonish all Ghanaians to learn the necessary lessons for the future, even as State institutions work to bring a resolution to the matter, and those who are seen to have indulged in criminal activities, are brought to justice.

Hundreds of Ghanaians lost millions of Ghana cedis after investments got locked up with Menzgold.

This is despite several protests by the aggrieved customers to pile pressure on the government to expedite processes to enable them to retrieve their monies.

Nana Appiah Mensah (NAM1), Chief Executive Officer (CEO), Menzgold, is in Dubai where he is facing a misdemeanour charge over a US$23 million deal, gone bad.

He is currently being held on remand at the Al Barsha police cell.

The misdemeanour charge in Dubai is equivalent to a second-degree felony in Ghana and if found guilty he could spend up to two years in prison.

In Ghana, the Economic and Organised Crime Organisation (EOCO), has frozen the properties of Menzgold and its associated companies.

It has, however, failed to fully pay its numerous aggrieved customers the value on their gold deposits as well as their entire investments.