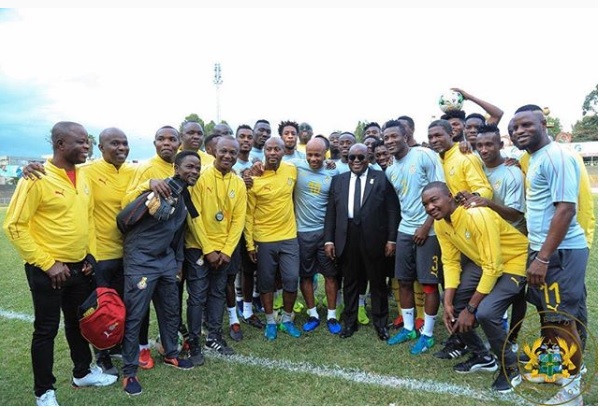 President Nana Akufo-Addo is in Egypt to watch the Black Stars opening game against Benin in the on-going African Cup of Nations tournament (AFCON).

The President met the players and officials of the team on Monday night after he arrived in the country to motivate them ahead of the match later on Tuesday.

Before the departure of the team from Ghana to prepare for the tournament, the president met with them at the Jubilee House in Accra.

In that meeting, President Akufo-Addo promised that he will be present to watch their opening game and hopefully be at the final.

“It’s my intention to come and watch your first match on the 25th of June. I will be in Egypt to see you play and if with God’s grace, which I believe he will give us, and we make the final I am going to come there as well and watch,” Akufo-Addo said.

While urging the players to go all out and win the trophy, he said Ghanaians are in high anticipation of the continental trophy after over three decades of drought.

“I will bring you the support of the entire nation. So we wish you the very best of luck and, hopefully, the next time we meet each other it will be good times again for Ghanaian football. I know you are ready and crying for it so go out there and let our people also be happy. They have been moaning for too long and the time is now to lift their spirits,” Akufo-Addo noted.

The game between Ghana and Benin will be played at the Ismailia Sports Stadium at 8:00 pm today, Tuesday.

The match will be televised on Citi TV.

Helena Huang appears in court, handed over to Immigration Service

Helena Huang appears in court, handed over to Immigration Service