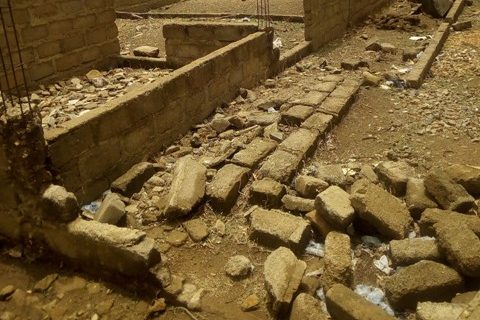 An Information and Communication Technology (ICT) laboratory being constructed at the Zanlerigu Junior High School (JHS) in the Nabdam District of the Upper East Region has been abandoned for lack of funds.

The project, which started in 2009 and constructed to window level, has been left to deteriorate with part fallen as result of the lack of resources to complete it.

It is intended to enhance teaching and learning of ICT, as a subject to equip the pupils with the requisite practical knowledge on the subject initiated by the management of the school.

The idea was to ensure that the pupils of the school were not left out of the technological evolution that made the world a “global village” and to make them appreciate the subject.

In an interview with the Ghana News Agency, (GNA), Headmaster of the school, Mr Hamza Ayinbisah, stated that “the project is good, but it is unfortunate it has been abandoned because of funds and all attempts to draw the District Assembly’s attention to continue work on it did not yield anything”

He said the issue of the ICT laboratory had been discussed at Parent and Teacher Association (PTA) meetings in a bid to find alternatives to secure funds to complete the project.

Mr Ayinbisah said “anytime I raise this project in our PTA meetings, the complaint was that there is no money, even though each of them could lecture you on how paramount the project is.”

The Headteacher underscored the importance of the project to the development, and academic advancement of children in the community, adding “when this project is completed, it will not only help the current pupils of the school, but children of this entire community.”

The Headteacher disclosed that the project started with a levy of GHC10.00 paid by each pupil during each term, and stated however that due to extreme poverty in the community, parents could not honour the said amount, hence the abandonment of the project.

Mr Ayinbisah explained that the lack of the ICT laboratory rendered the tuition of the subject to abstract and made it difficult for the pupils to understand.