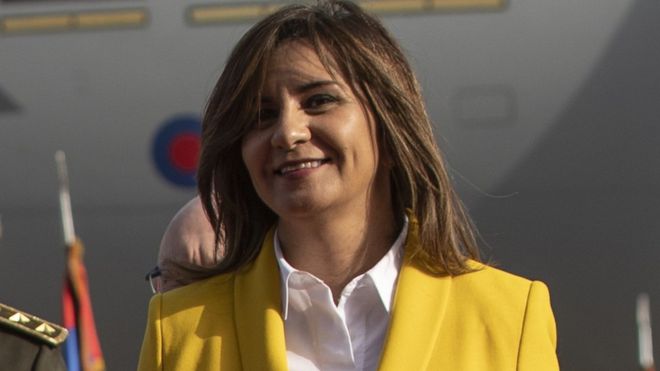 Egypt’s minister for expatriates’ affairs has downplayed the significance of comments she made about its critics abroad, whom she said would be “cut”.

A video of Nabila Makram speaking at a meeting with Egyptians living in Toronto, Canada, appears to show her also making a throat-slitting gesture.

She later said she liked to improvise and that “such simple, spontaneous words reach the hearts of the people”.

Ms Makram also denounced what she called the “manipulation” of her words.

The incident showed “how any word could be used to contribute to the fierce war against the country which aims at dividing the ranks”, she told Mehwar TV.

The video of the Toronto meeting, published by the pro-opposition Egyptian Canadian Coalition for Democracy (ECCD), shows Ms Makram telling the Egyptian expatriates: “No matter where we go, Egypt will remain in our hearts.

“We will not tolerate anything to be said about it. Anyone who says anything [negative] about Egypt abroad will be cut,” she added to laughter and applause.

The minister’s remarks were criticised on social media, with some opponents of the Egyptian government saying they constituted a direct threat against dissidents, particularly after last year’s murder of the dissident Saudi journalist Jamal Khashoggi by Saudi agents in Istanbul, Turkey.

More than 1,000 protesters have been killed in clashes with security forces, at least 60,000 people are reported to have been detained, hundreds have been handed preliminary death sentences by courts, and hundreds more have gone missing in apparent forced disappearances.

Most have been supporters of Morsi’s now-banned Islamist movement, the Muslim Brotherhood, but liberal and secular opposition activists have also been targeted.