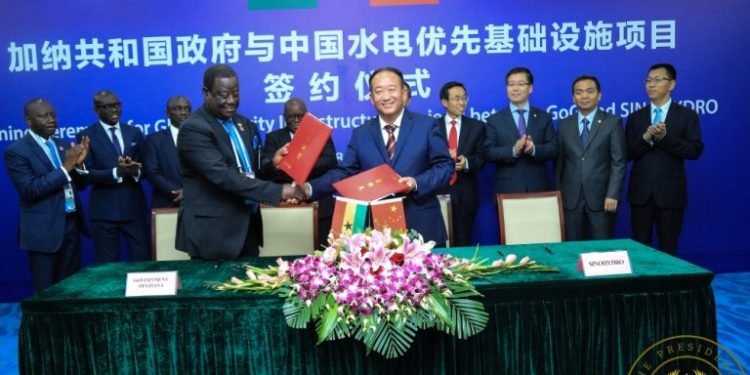 When President Akufo-Addo travelled to China in February this year, a number sweet packages were heard from his meeting with President Xi Jinping including the announcement of the 60-billion-dollar investment deal for Africa.

The President also held a series of meetings with CEOs of Chinese big corporations aimed at securing the right investment for Ghana.

On the President’s Facebook wall, His Excellency Akufo-Addo said, “amongst others, I held separate bilateral talks with President Xi Jinping, and Chinese Premier, Li Keqiang, the talks centred on deepening the ties of co-operation and the bonds of friendship between the two countries. The $2 billion Sinohydro deal was also signed between the Government of Ghana and China.”

The barter trade facility according to the government will be used to construct roads, hospitals, houses, rural electrification, interchanges, bridges and other government priority projects.’’

The agreement subsequently received parliamentary approval in July despite protest by the Minority who insisted that terms of the agreement made it a loan.

Government has said the deal is not a loan but a barter arrangement.

When President Akufo-Addo travelled to Kigali, Rwanda in September 2018, he had cause to explain to the Ghanaian community there that the deal with China is barter, not a loan.  “What we did in China is to sign a two-billion-dollar agreement to build our infrastructure with bauxite,” he said.

President Akufo-Addo added that “it’s a barter arrangement which means we will export refined bauxite to China without it being added to our debt stock.’’

I have heard the President and several of his appointees speak with passion about the Sinohydro deal and how it will change the face of Ghana’s development. We are told of how the 2-billion-dollar deal will help government construct bridges, hospitals, schools, etc.

But is this deal really the game changer we are expecting to boost our development? Now, each of Ghana’s 16 regions will benefit from the Sinohydro arrangement, with hospital projects, the extension of electricity to rural communities, and construction of court and residential buildings for the Judicial Service, landfill sites and industrial parks.

It will address major infrastructure challenges in the country. The first phase of the project, costing 646.6 million dollars began in April this year, with the sod cutting of the Tamale Interchange.

Per the deal, as approved by Parliament, the first phase of the project will include the Construction of Accra Inner City Roads, a total of eighty-four (84) kilometres of roads located in Trobu, Anyaa-Sowutoum, Dome-Kwabenya, Adenta and Teshie.

Lot 2 will include the construction of Kumasi and Mampong Inner City Roads, a total of one hundred (100) kilometres of inner-city roads.

The construction of the Tamale Interchange which has already begun makes up Lot 3.

Lot 4 will have the construction of the PTC Roundabout Interchange, in Sekondi-Takoradi, the first-ever interchange in the western part of our country;

Lot 5 captures the dualisation of the Adenta-Dodowa Road, a fourteen (14) kilometre stretch which is aimed at reducing congestion, improving road safety, and reducing travel times on the corridor;

Lot 6 has the construction of Sunyani Inner City and Berekum Township Roads.

Lot 7 will be the construction of Prestea Township and Cape Coast Inner City Roads.

Lot 9 – Rehabilitation of the 38 kilometre Akim Oda-Ofoase road, which is part of the trunk road network, IR3, and passes through several rural communities that connect Akim Oda to Ofoase; Akim Oda-Ofoase Road.

Under Phase 2 of the Sinohydro deal, which will come on stream after approval by Parliament, an additional 1,300 kilometres of roads, 3 interchanges, and 69 steel bridges will be constructed, at an estimated cost of $850 million dollars.

It is not difficult to understand why road construction and rehabilitation has dominated Phase 1 of the deal.

I have sat in meetings when chiefs from all parts of the country who pay a courtesy call on the President demand among other things the construction of roads in their areas.

In the run-up to the 2008, 2012 and 2016 elections everywhere then Candidate Akufo-Addo visited, the major demand was road construction, it’s not surprising that a total of 442 kilometres of the road will be constructed under the deal.

Communities with challenges with bridges, hospitals, schools and other social amenities will also be taken care of in the arrangement.

The Chinese Ambassador to Ghana Shi Ting Wang in a recent meeting with the Speaker of Ghana’s Parliament said the Chinese government will offer more than what the deal spells out.

Mr Wang said the $2 billion frameworks is “only one example that China in the future will continue to give our support in the areas that concern your government.”

The government of the late President, John Evans Atta Mills (May God keep his soul) in 2010 announced in a similar fashion a facility of 3 billion dollars from the Chinese government. The Ghana News Agency reported that “President John Evans Atta Mills and his Chinese counterpart, Hu Jintao, have signed a deal for China to give Ghana a loan of three billion dollars to develop her energy sector. Specific areas to be targeted under the deal include infrastructure development, job creation and other derivatives of oil and gas.”

It continued that “the package, which would be disbursed through the China Development Bank, constitutes the first phase of Chinese assistance, which would start rolling out in the next six months after the Government of Ghana has devised a framework for the package.

The deal was announced following closed-door bilateral talks between President Mills and the Chinese President held at the Great Hall of the People in Beijing, on the second day of President Mills’ five-day state visit to China.”

My checks revealed that only 1 billion of the 3 billion dollars arrived in the country and that was used for the construction of the Atuabo Gas Plant in the Western Region.

The rest of the cash never come. It is my expectation that the government of Nana Akufo-Addo will learn from the experience of the 3-billion-dollar deal.

From the foregoing, it appears the deal and the plans look great on paper and remain set to transform Ghana’s infrastructure to appreciable standards. Theoretically, it can be safely described as the game-changer.

But the question on the lips of many is what happens if this deal fails, or is partly realized like what happened under the Mills regime? Already, the expectation is high and a lot of government infrastructure hangs on this deal. What if the money does not come? Is there a plan B for the government on how to address the same problems tabled for the Sino-hydro money?

Even though we are told the deal is not a loan but barter, have we for once thought of the effect if mining begins in the Atewa forest? Already civil society groups and residents of Atewa and its surrounding towns are raising red flags about plans to mine the forest.

According to Civil Society group, A-Rocha-Ghana, the Atewa Range Forest Reserve is internationally recognized as one of the highest priority ecosystems in West Africa for its high species diversity, high levels of endemism and great hydrological importance. It is also recognized as an Important Bird Area.

According to the group, the greatest threat though comes from large-scale commercial mining. The hills hold deposits of bauxite and in recent years, international companies have explored the possibility of open cast mining inside the reserve. The government of Ghana is currently investing in the bauxite industry and Atewa has been named as a key source of ore.

In the face of all these, President Akufo-Addo has given the strongest indication yet that mining in the forest will not in any way destroy the environment.

He believes that the technology to be adopted by the miners would reduce the impact of the mining activity on the quality of life of persons whose livelihoods depend on the forest’s resources.

“Beginning now, the full-scale exploitation of Ghanaian bauxite resources [will commence]. We are in a better place, technology-wise than we would have been 20, 30 years ago [to do this]…I am satisfied by what I have been told and what has been demonstrated to me that, it is possible for us to get that red matter out without disturbing the wildlife that there is in the Atewa mountains,” the President said.

He added, “this is something that we have to keep an eye on all the time. A very major part of any concession that you give to people to come to look for oil in our waters has an environmental impact. It is important that those who are responsible for making that assessment are accurate, they are true, they are honest. They don’t give passes corruptly.”

Nana Akufo-Addo made the statement during the Sustainable Ocean Industries Conference organized under the auspices of the Petroleum Commission of Ghana, Aker Energy and the Norwegian Embassy in Accra recently.

Having said all that the deal promises to give us, I think it is important to think about what will become of the arrangement if there is a change in government. This is particularly important as the current government has just about a year left on its four-year mandate and no real work has begun on the ground part from the sod cutting for a Tamale Interchange. This ordinarily should not have been an issue, but given our peculiar understanding of how democracy works and what change in government means, I am worried that should there be a change at the helm, the deal may be distorted, and projects started will be left hanging.