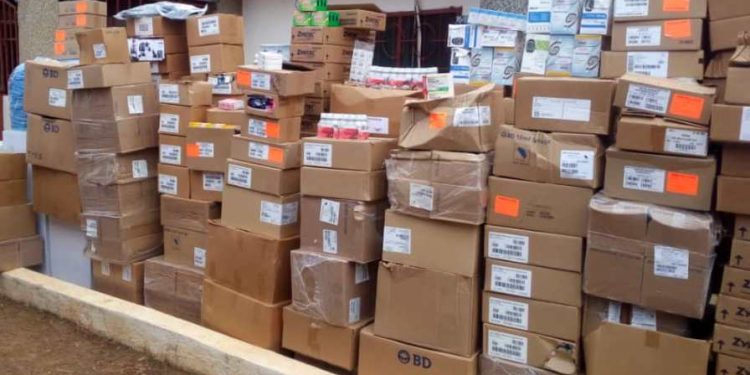 The temporary Central Medical Stores at Spintex has been mentioned in the Auditor General’s report for alleged misapplication of drug funds.

According to the report, authorities at the Central Medical Stores spent GHc300,000 of drug funds on payment of rent contrary to Regulation 179 of Financial Administration Regulations, 2004.

The report stated that that the amount was paid to P.S.B Realty Company Limited in March 2017.

“We observed that the TCMS in March 2017 used drug funds amounting to GH¢300,000 as part settlement of rent to P.S.B. Realty Company Limited,” the report stated.

It also stated that “four BMCs, misapplied drug funds amounting to GH¢27,763 as part payment for the purchase of computers.”

These include the Sissala East Municipal Health Administration in the Upper West Region, Suhum Government Hospital in the Eastern Region, Mamponten Health Center in the Ashanti Region and the Krachi West District Health Directorate in the Oti Region.

The Auditor-General, Daniel Yaw Domelevo is worried that the continuous use of drug funds for non-drug related expenditure could seriously affect the sustainability of the fund.

“Regulation 179 of Financial Administration Regulations, 2004 states that a head of department may not Annual Report of the Auditor-General’s on The Public Accounts of Ghana, Ministries Departments and Other Agencies (MDAs) for the year ended 31 December 2018 136 authorise payment to be made out of funds earmarked for specific activities for purposes other than those activities,” the report said.

The Auditor-General cautioned against such practices, stressing that it could have dire consequence on the delivery of healthcare in the country.

“The continuous use of drug funds for non-drug related expenditure could seriously affect the sustainability of the drug fund in the near future,” the report said.

The Central Medical Stores earlier sited at Tema and contained every conceivable drug imported into the country before onward distribution to the various regions was razed by fire on January 13, 2015.

Ghana’s stock of medical supplies that were lost after the fire was estimated at GHc237 million.

The Global Fund later forgave Ghana after its $27 million worth of medical supplies it gave Ghana was lost in the central medical stores’ fire.

Speaking at the Meet the Press Series in Accra on May 2019, the Minister of Health, Kwaku Agyemang Manu said the Global Fund had pardoned the country after it was discovered that health commodities worth $27 million belonging to them were affected.

Per the agreement, Ghana had to refund the amount but the Minister said the donors knowing very well that Ghana does not have the financial strength to pay back the money had decided to let it go.

“After the Central Medical Stores disaster, we did an audit and realised that some of our donors had commodities in there. Global Fund has become a major stakeholder in support of our fight against Malaria, HIV/AIDS and Tuberculosis. They alone lost close to US$27 million in commodities that got burnt. By the rules, US$27 million should have been recovered from our country.  Looking at the realities, they indicated that there was no way Ghana could pay US$ 27 million. So the ministry agreed with them to improve on our supply chain,” the Health Minister said.