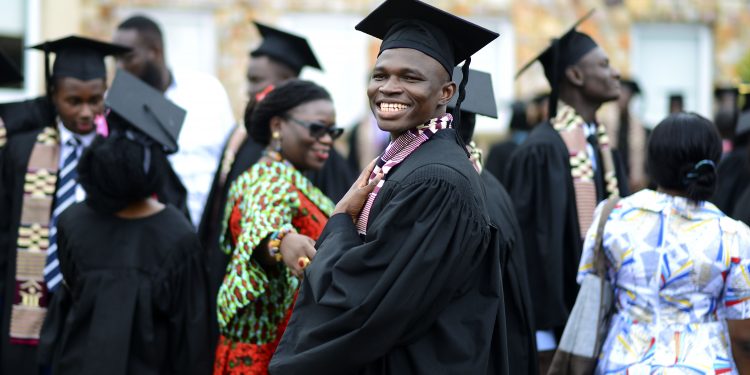 From a small farming community in rural Ghana with no internet access, this inspiring Ashesi graduate is on a path to becoming one of Ghana’s leading artificial intelligence researchers.

Maxwell Aladago arrived at Ashesi University on a full scholarship with a very limited idea of how computers worked. Four years later, he was developing artificial intelligence algorithms for various applications, including the detection of malaria parasites in a blood smear. And now, as a Ph.D. candidate at Dartmouth College, he is hoping to help deepen artificial intelligence research for solving some of Africa’s toughest challenges. This is his story.

Maxwell Aladago was teaching in a basic school when he first met the students who were visiting as volunteers from Ashesi University. He had finished high school, and for him and many others like him, the next logical step was to find work and make an income. In conversations with the volunteers however, they encouraged him to apply to Ashesi.

Maxwell went to an internet café later that month, to learn more about this university and concluded that it was beyond his reach. He still put in an application, however, to keep his word to the two student volunteers he had met. Unable to pay the application fee himself, his friends at Ashesi spoke to an employee of the university, who paid on his behalf. His perception of how accessible Ashesi was for him, did not change, even when the university called him for an admissions interview.

Which was why when he received news that Ashesi had accepted him, Maxwell was unsure whether he should follow up on it. The nearest place where he could get access to a computer was a 45-minute bicycle ride away. And he still had work to finish on his family’s farm. But he honoured the call and rode out that afternoon to an internet café Bawku, where the manager helped him open his acceptance email.

What he saw next shocked him. He had been named a Mastercard Foundation Scholar at Ashesi. Launched in 2012, the Scholars programme focuses on enabling students whose talent and promise exceeds their financial resources to complete their education. And for Maxwell, the scholarship award meant a new door had been opened for him in the most unexpected of ways.

He rode back home to share the news with his family, who welcomed the news with more skepticism than he. The scholarship offer was too good to be true. “My mother thought it was a scam,” he recounts. “But thankfully, I was not my mother. I responded to the email, accepting the offer to join Ashesi. It became one of the best decisions I have ever made.”

Discovering Machine Learning, And the Opportunities for Its Application in Africa

Before Ashesi, Maxwell had an extremely limited understanding of how computers worked. When he selected Computer Science as his major when applying, he had done so because someone told him to. It was at Ashesi that he learned for the first time that computers could be programmed by people. And for the first time as well, he learned that there were people in Ghana who could do this kind of work, and he could become one.

So, Maxwell spent his early years on campus growing his skills in programming and exploring tools and resources. He became one of the most prolific members of the Class of 2018, volunteering his time to teach and mentor others; being selected to represent Ashesi as a volunteer at the inaugural Next Einstein Forum in 2016; raising funds with friends to furnish two classrooms in the rural school where he first heard about Ashesi; being selected for the College of Wooster’s Applied Math and Research Experience internship programme, where he helped develop a tire tread wear model for Goodyear Tire and Rubber Company; and being selected as an Engineering intern for Goldman Sachs, after which he also received a full-time job offer.

And it was somewhere during his second year at Ashesi, that Maxwell discovered an opportunity to pursue an opportunity in machine learning. During an interview for an on-campus job teaching junior students, he was invited to join a road evaluation research project in the computer science department. 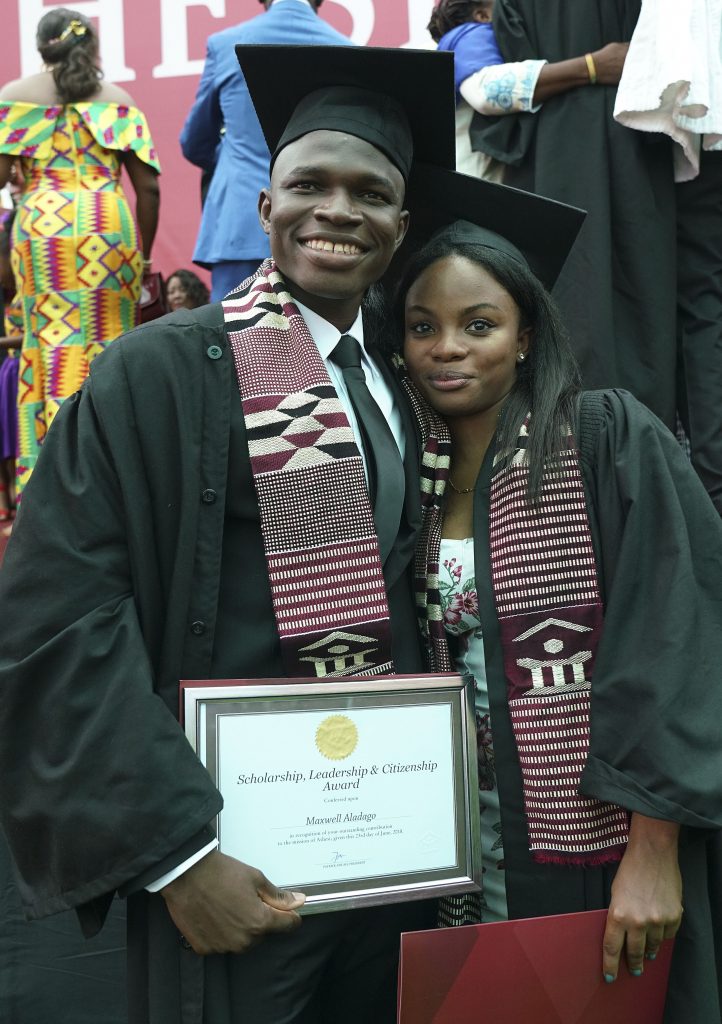 “I loved research, and I decided to take that offer,” Maxwell recollects. “The year before I had attended two presentations from final year students at Ashesi Using machine learning, one presentation was on classifying fake news, and the other was on predicting the spread of Ebola. The possibility to develop machine learning algorithms that could do such things was exciting to me. The research project I joined, was on developing algorithms that could allow researchers to evaluate the nature of roads using accelerometer readings from smartphones.”

The project enabled Maxwell to gain deeper understanding of artificial intelligence and machine learning. And for his final year research work, he started fishing for ways to apply this experience in healthcare from faculty at Ashesi who had research interest in medicine. One faculty member shared data from her research with Maxwell, on the high incidence of malaria-related deaths in Ghana and Africa. And seeing the scale of the challenge, he decided to dedicate his final year to developing an algorithm for identifying the different growth-cycle stages of malaria parasites; to help develop a low-cost tool for measuring the effectiveness of malaria drugs in rural parts of the country.

“The future of machine learning is in Africa,” Maxwell says. “We see different challenges like precision agriculture, or health monitoring and surveillance, that machine learning can accelerate solutions for. We are well-positioned to use machine learning to create incredible impact across Africa.”

Maxwell’s research has gained broad interest, and he has been invited to share his work at the IEEE’s 2019 Africon conference in Accra.

Joining A Ph.D. Programme At Dartmouth, Inspired by The Teachers Who Shaped Him

While at Ashesi, Maxwell spent time working with a Fulbright scholar from Dartmouth College. Professor Torresani spent a semester teaching Machine Learning at Ashesi, following a research project at Facebook, and advised Maxwell on his final-year research work. Working with the Fulbright scholar and knowing that the Head of Computer Science at Ashesi, Dr. Ayorkor Korsah, was a Dartmouth alumna, Maxwell felt drawn to the university as an option to further his research career. He applied, and was accepted to a fully funded Ph.D. Programme in Machine Learning at the University. But choosing to go on to a Ph.D. was a tough call for Maxwell, who turned down an alternative in a job offer from Goldman Sachs in London. Yet, getting the opportunity to grow to become a contributor to computer science knowledge, was an opportunity he decided that he could not miss out on.

“I had a lot of conversations with a lot of teachers at Ashesi and the University’s Career Services Office,” he says. “I got a lot of insights and perspectives around the two really good possibilities for the next steps of my career. I believe this was the right choice. When I look at the amount of support I have gotten from teachers throughout my life, I feel I must give back to others in the same way. And I have to help future generations of students like myself to become aware of the vast possibilities that exist for them to explore the world.”

For Maxwell returning to Ghana, and Ashesi, as a researcher and academic will be a driving force for him over his next years at Dartmouth. But more importantly, he understands his new role as an example for his community back home.

“I often say I come from Zebilla,” he says. “Because most people do not know Googo, the small suburb of Zebilla where I actually come from. My journey through Ashesi, and who I have become, has now redefined the meaning of education for everyone in my community. Many other parents now realise that when you give your children a chance to get a good education, it comes with a lot of benefits. They now see education as a liberating force. And they now understand, that when your child does well in school, there are scholarships out there in the world that they could gain from. This was not something they appreciated as much before.”

As a beneficiary, Maxwell also believes that the Mastercard Foundation’s Scholars programme which enabled him to attend Ashesi, is one of the best things that could have been created. Launched in 2012, the Scholars programme allows students whose talent and promise exceed their financial resources to complete their education. With a vision that education is a catalyst for social and economic change, the programme focuses on developing leaders who are transformative, encouraging them to be active contributors in their communities. Ashesi was among the pioneering group of nine which launched the Scholars programme network; a network which now spans 32 leading institutions around the world, and will be supporting the education of over 35,000 young people from Africa.

“There is no other university in the world where my story would have been possible,” says Maxwell. “And the global experiences I have had, the friends I have made, and all the other opportunities I got access to here have helped establish who I am today. If I had a chance to speak with the team at the Mastercard Foundation, I would simply thank them. Thank them for working with institutions like Ashesi, and enabling opportunities for young people like me, to see and contribute to the world. It has changed my life.”

Is PDS capable of transforming the energy sector? [Article] 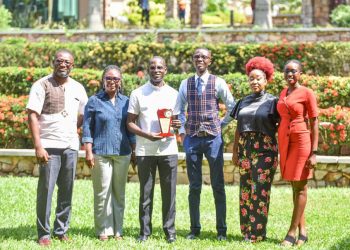