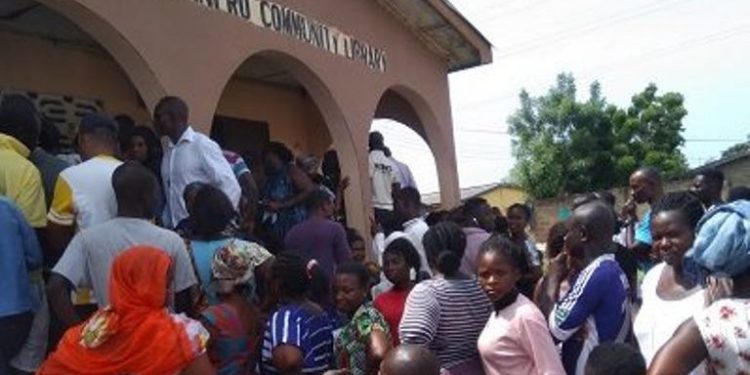 The first day of the Ghana card registration exercise in the Northern Region was hampered by logistical challenges.

Some of the applicants who visited the centres in the region to register were asked to come back tomorrow, Saturday.

Some residents of Kanvili in Tamale, shared their disappointment with Citi News.

One gentleman complained that: “The materials arrived late and we don’t understand the reason why they wasted so much time like that. We’ve been here since morning and they just arrived. We don’t know why they delayed like that.”

“When I got here, the officials were here but when we asked, they said the materials were not ready. Even tables were not given to them. We were just sitting on the chairs waiting for them to come. It’s only the TIN number form we were given to fill,” another gentleman said.

Assistant Commissioner of Immigration, Francis Palmdeti, who is also Head of Corporate Affairs at the National Identification Authority (NIA) explained the reasons for these challenges to Citi News:

“We are supposed to have 750 centres across the region and we’ve had the information that some people had issues in arriving on time and so we know these may have affected some of the centres. But these are first day issues and they will be resolved and centres will start working,” he said.

“I can assure you that these issues cropping up in terms of some centres not opening yet and some opened but not functional will be resolved in due course. In some cases, they haven’t received the full complement of logistics. We have encountered these things even in Accra but these are not issues that will derail the exercise in the Northern Region,” he assured.

Meanwhile, some centres have postponed the registration until other days when they are able to fix the challenges.

At the Tamale Technical University, few people were in queues to register at the time Citi News visited the centre, earlier in the day.

Officials, however said the centre was only processing offline documents.

Residents in the Tatali Sanguli district of the region were also disappointed over the challenges.

Apart from the late arrival of equipment, the residents complained that there was a problem with the coding of the homes.

They, therefore, called for the immediate correction of the coding.

The registration process for the National Identification Card, also known as Ghana Card, has been fraught with several challenges since it started in April.

Applicants from various parts of the country have complained of long queues, network failure, malfunctioning equipment, and other hectic processes they are compelled to go through before securing their cards.