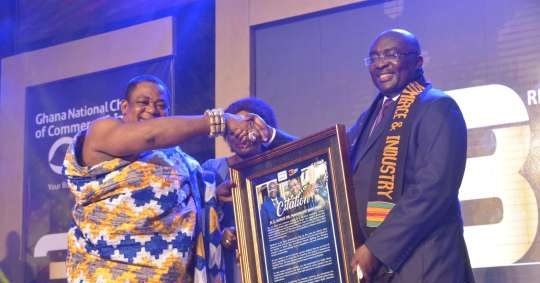 The Ghana National Chamber of Commerce and Industry (GNCCI) has conferred an Honorary Membership on Vice President, Dr. Mahamudu Bawumia for championing private sector development at its third Chamber Business Awards in Accra.

Dr. Bawumia, who was the Special Guest of Honour at the event, was presented with a citation and decorated with a sash for his immense contribution towards the digitization of the Ghanaian economy and being a private sector supporter.

Nana Appiagyei Dankawoso I, the President of the Chamber, who decorated the Vice President, said the conferment of the honorary membership was to encourage him to do more for private sector growth.

The event was held under the theme: “Digitising the Ghanaian Economy for Competitive Edge in Globalised Markets,” which attracted captains of industry, members of the Council of State, Ministers of State, Members of Parliament, development partners and the Diplomatic Community.

The Chamber Business Awards is designed to acknowledge and celebrate businesses and personalities who have demonstrated innovation and excellence in business practice as well as contributed towards the overall development of the Ghanaian economy.

Dr. Bawumia said the theme for the celebration was apt since it was in tandem with the government’s vision of digitizing the Ghanaian economy and making it globally competitive.

He said data was the “new oil” in the Fourth Industrial Revolution, which enabled government and businesses to take the right decision.

In that regard, he said, the Akufo-Addo-led administration on assuming the reins of government undertook some initiatives such as the biometric national identity (Ghana Card), digital property address system and mobile money interoperability system, to digitize the Ghanaian economy.

Those initiatives, he said, were intended to promote the delivery of quality social services, enhance the ease of doing business, financial inclusion and reduce human contacts in business transactions which often breeds corruption.

The Vice President explained that those programs were rolled out through public-private partnerships and lauded the Ghanaian private sector players for playing a pivotal role in implementing those programs.

In January next year, Dr. Bawumia said government would launch Ghana.gov, an online portal, which would enable businesses and individuals to access all government services electronically.

Vice President Bawumia commended the Chamber for protecting and promoting the commercial and industrial interests of businesses and expressed government’s commitment to pursue the right policy mix that would enhance growth and prosperity for the private sector.

Nana Dankawoso, the President of the Chamber, said for Ghanaian businesses to achieve global competitiveness, it required shared and collective responsibility of all stakeholders.

He, therefore, underlined the need to build the capacities of small-and-medium scale enterprises (SMEs) so that they would be innovative and responsive to the changing trends in the global marketplace.

“It is instructive that we encourage businesses to be more creative in the areas of marketing, packaging, branding, pricing, technology delivery, and effective customer care,” he stated.

The President of GNCCI commended the government for its digital initiatives and taking the bold step to host the African Continental Free Trade Area (AfFTA) Secretariat in Accra, which would inure to the benefit of Ghanaian businesses.