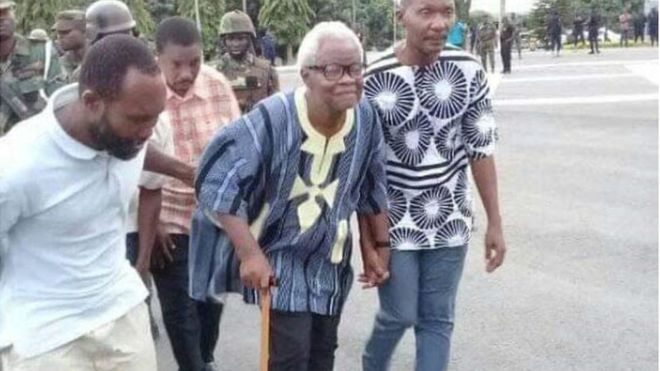 The Homeland Study Group Foundation, (HSGF), which has been campaigning for the secession of some parts of Ghana into an independent ’Western Togoland State’ declared their independence yesterday, Saturday.

Leader of the Separatist movement, Mr. Charles Komi Kudzordzi alias Papavi Hogbedetor who is in his 80s made the declaration at a public gathering in Ho on Saturday, November 16, 2019.

Addressing a cheerful group of members of the separatist movement in the native Ewe language, Papavi Hogbedetor recounted their struggles to restore the independence of the pre-independence Western Togoland territory, a German protectorate which was joined to the then Gold Coast to form the new independent country, Ghana on March 6, 1957 under circumstances he believes were ”illegal”.

Citing the recent omission of roads in the Volta Region from the Critical Roads list in the 2020 budget, Papa Hogbedetor said ” We’ve all witnessed what happened recently when we (Volta Region) were forgotten by the government in its budget. Can a parent forget about their children? We’re not their children, so they have forgotten about us.”

The announcement sent his supporters into wild jubilation, while the old man was whisked away from the scene in a waiting car.

The event which was broadcast live on Facebook by some members of the group, took place at the former premises of Unity Rural Bank, some 100metres away from the Ho Police Training school.

The Homeland Study Group Foundation which intensified its campaign to secede the Volta Region and parts of the then Northern and Upper East Regions along the eastern border of Ghana into an independent state in 2017 has had its leaders arrested and charged with treason felony on at least two occasions in recent times.

A member of the group, Kotsi Mawuko Ekpo, who spoke to V1 TV said the group has ”established governing structures for the new Western Togoland”.

About 81 members of the separatist group were in May 2019 arrested for assembling for a protest over the arrest of seven leaders of the Homeland Study Group Foundation.

Also, the Attorney General in July 2019 withdrew all charges brought against the members of Homeland Study Group Foundation who were working for the secession of the Volta Region from Ghana. 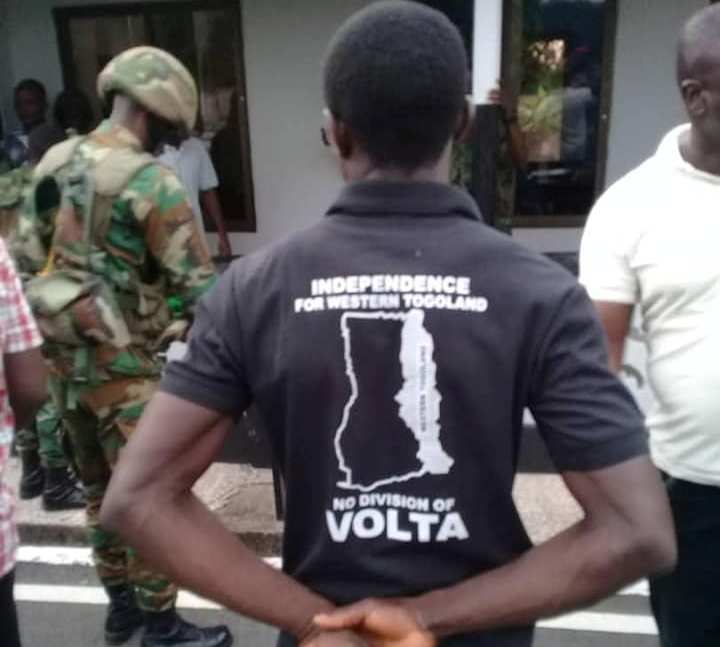 They were arrested by a combined team of police and military personnel at Ho on Sunday, May 5 when they were holding a meeting to allegedly to arrange to declare a Western Togoland as an independent state on May 9, 20I9.

History of Western Togoland (from www.britannica.com)

Togoland, former German protectorate, western Africa, was divided between the Republics of Togo and Ghana.

Togoland covered 34,934 square miles (90,479 square km) between the British Gold Coast colony to the west and French Dahomey to the east.

Inhabited by a mixture of Ewe and other people, it became a political unit in 1884, when, in the European scramble for overseas territories, German chancellor Otto von Bismarck claimed it for Germany and other European powers formally recognized the claim.

The Germans intended to make Togoland a model colony. Because the region lacked mineral resources (its phosphate reserves were not then known), Germany concentrated on agricultural development.

Lomé, on the Gulf of Guinea, was developed as the principal town and port, and roads and railways were constructed to link the port to parts of the interior.

The Germans also established a judicial and administrative system. The infrastructure, designed to serve German needs, brought some unity to the protectorate.

During World War I France and Britain occupied the protectorate, and in 1922 it was formally divided between them under a League of Nations mandate.

Two-thirds of the land and people, including Lomé, became French Togoland, bordering Dahomey.

The remainder in the west, bordering the Gold Coast, became British Togoland.

In 1946 the two Togolands became United Nations trust territories. The British part was administered with the Gold Coast and became part of independent Ghana in 1957, but French Togoland remained administratively distinct from Dahomey (now Benin) and became independent as the Republic of Togo in 1960.

Lingering sentiment for the reunification of Togoland, especially among Ewe people in Ghana, has occasionally strained relations between Togo and Ghana since independence.

When the hospital was a library and the sick read! [Article]

When the hospital was a library and the sick read! [Article]