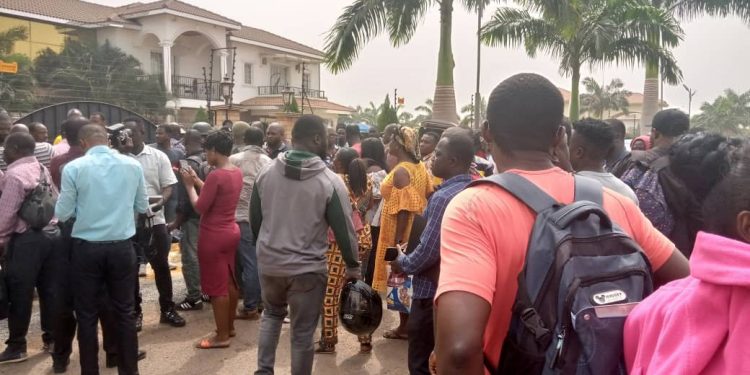 Some Menzgold customers who were arrested on Wednesday for massing up at the Trassaco residence of the company’s Chief Executive Officer (CEO), Nana Appiah Mensah, popularly known as NAM1, are struggling to meet bail conditions for their release.

About 90 of the customers were arrested by the police for trespassing, unlawful entry and causing injury to the security detail at the Trassaco estate.

Police officials from the Accra Regional Command claimed they arrested the customers to maintain order at the place.

Speaking on Eyewitness News on Wednesday, spokesperson for the Coalition of Aggrieved Customers of Menzgold, Francis Owusu said “as we speak now they [police] have granted us bail but we are to provide one surety each before we will be allowed to go. So we are still stranded here looking for relatives and friends to come and help us secure our bail.”

What happened at NAM1’s residence?

According to reports, the customers after marching to the Trasacco gates were denied entry by the security personnel at the gates.

The customers were said to have overpowered the security personnel and entered the premises after which the police came in to restore calm.

Spokesperson for the Coalition of Aggrieved Customers of Menzgold, Francis Owusu, on Eyewitness News said the reason why they stormed the residence of NAM1 was to demand from him a list of the people he claimed he had so far paid their locked-up cash.

“For almost one week now Nana Appiah Mensah and his Menzgold has been telling lies to the general public that they have paid 200 of their customers which is false. So, as customers in the various regions, we decided that we will pay Nana Appiah Mensah a visit and find out from him who those people that he keeps telling the general public that he has been paying them are. Lo and behold we were able to get to his place at the Trassaco valley. When we got to the gate we asked the security man at the gate of Nana Appiah Mensah’s residence to allow us in and he opened the gate for us and we entered the premises,” Francis Owusu explained.

“Actually we didn’t enter Nana Appiah Mensah’s house, we were just in front of his gate. All of a sudden we heard three gunshots from his house and then the internal security at the Trassaco came around and we approached them and they asked us what we were here for and we told them we were here to demand from Nana Appiah Mensah our investment,” Mr, Owusu added.

He said, they are determined to retrieve their investments through every possible means adding that “this was just the beginning” of several actions they intend to take.