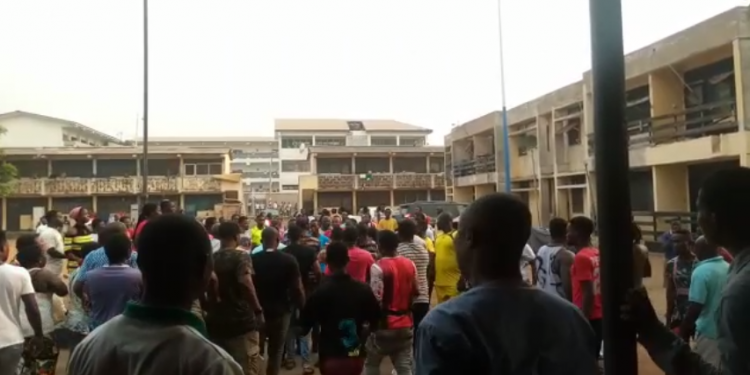 The Member of Parliament (MP) for Odododiodoo, Nii Lante Vanderpuye has alleged that he was on Tuesday, January 28, 2020, assaulted by men affiliated to the governing New Patriotic Party (NPP).

This alleged attack led to a clash between some NPP supporters and National Democratic Congress (NDC) supporters in front of the Jamestown District Police Headquarters.

The incident allegedly took place during the commissioning ceremony of the rehabilitated Ussher Polyclinic at Jamestown, an event graced by the First Lady.

Speaking to Citi News after lodging a complaint at the police station in the area, Nii Lante Vanderpuye recounted that: “a group of hoodlums in NPP colours came out and said they will not allow me to enter the programme. I asked why? They said the programme was not for NDC so no NDC member would [be allowed to] be part of the programme.”

The MP claimed the men who attacked him were armed with machetes and guns.

Aside from this, he said the police witnessed his assault but did nothing about it.

“When they were continuing with the agitation and the assault, they were hitting people. One hit my chest. Police officers were standing there looking at them… I was utterly shocked and Ghana Police Service officers looked on unconcerned for people to assault a Member of Parliament and other people openly.”

Mr. Vanderpuye said he eventually left the scene after appeals from some elderly onlookers but warned that if nothing was done about his complaint, war drums would have been beaten “and we shall all dance to it.”

Responding to the claims, the NPP Communications Director for Odododiodoo, Malik Odenke Abbey, denied knowledge of any attack on Mr. Vanderpuye.

“I personally have been part of the protocol of the event and I have not even heard a single hint of [the alleged attack]. So I don’t know where this allegation is coming from.”

He said it was ultimately an excuse to boycott the event “and deceive the people of Odododiodoo as to why they didn’t come” for the event.

About refurbished Ussher Clinic in Jamestown

The Ussher Clinic in Jamestown, Accra was refurbished by the GCB Bank Limited

The clinic, which serves a majority of the residents of the Ashiedu-Keteke sub metro of the Greater Accra region has seen very little renovation since its establishment in 1963.

Before the commencement of the renovation, the building was approaching a state of dilapidation with leaking roofs, ill-functioning washrooms, the lack of adequate clinical equipment to work and a generally unwholesome environment thereby endangering the lives of both staff and patients.

The renovation of the Ussher clinic is one of the activities under GCB’s CSR initiatives on health.