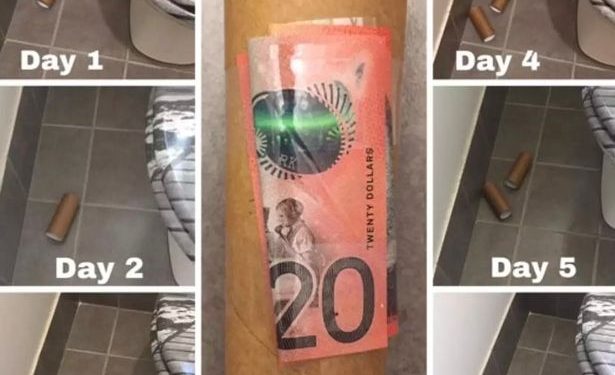 An exhausted mum who feels like the only one who cleans up around the house has invented a genius new game to keep her entertained as she goes.

Every so often she tapes money to the underside of mess around the house, including toilet rolls and pieces of paper which have been discarded on the floor.

When the money goes unclaimed, she ups the stakes – meaning anyone who decides to lend a helping hand could find themselves rewarded with a small fortune.

Unfortunately for her family, they are yet to join in with the litter picking, leaving only their hard-working mum to claim back her own cash.

Posting the idea to Facebook, the Aussie parent included a photo collage of finished toilet roll left lying on the bathroom floor, showing it left untouched for a full seven days.

If only someone else had thought you pick it up, they would have discovered a $20 note attached with the message ‘finders keepers!’

In the caption she wrote: “Needing something to inspire kids and husbands to tidy up around the house? Clearly this game hasn’t worked here yet, maybe one day.

Other parents who clearly recognised her struggle and wanted to try the game for themselves loved the post, which attracted more than 4,500 likes, as reported by the Metro.

One commented: “My kids would probably pick it up, take out the money, throw it back on the floor and forget about the entire purpose.”

A second replied: “The rolls would start to decompose in my house – no one would pick them up even if it saved their life.”

Another mum has adopted a less subtle approach in a bid to get her offspring to lend a hand with chores around the house.

After revamping her laundry area, she included a large sign to everyone else living in the home that reads: “Put your laundry away or I’ll punch you in the throat. Love mum.”