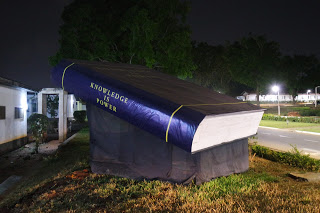 When you drive through the University of Ghana, you will notice a giant statue of a book at the main entrance with one ancient aphorism that has been viewed persuasively for years. The question however remains; Is knowledge really power? Is power not just power or is money not the closest to power. This article was inspired by this statue and will attempt to think of such things as real power is. I seek to question if indeed knowledge can be said to be power. Before the long philosophical debate, let’s tell ourselves a story.

Once upon a time, there lived a great and powerful emperor who ruled Rome, Marcus Aurelius was his name. He was a man of great learning and skill, considered with great respect and viewed as one of Rome’s most worthy leaders. For all the great legacies of Marcus Aurelius, his meditations are perhaps the most powerful extension of his influence. His writings and learning, his knowledge of Stoic philosophy has lived on for two millennia, receiving praise from other leaders, philosophers and writers long after he is dead and seemingly gone. It will appear in Marcus Aurelius, there is no debate; Knowledge is truly the source of his power and a great legacy.

The great emperor, Marcus Aurelius, in his writing had summed up the knowledge and principles necessary for a virtuous life. He laid the foundation of what was the essence of power over self and of a state. Just as one is tempted to conclude on the debate, the story gets interesting. The great King is ill and must name an heir, one for whom the knowledge of virtue, influence and power perseveres. Will the emperor adopt an heir, not of his bloodline or name his son, Commodus, as the next emperor? It will have been an easier choice, except that, his son was not ready, speaking as diplomatic of his incompetence as possible.

Commodus is certainly not the man Aurelius had written of in his meditation, perhaps just the opposite of everything a virtuous man should be; a man of little knowledge and discipline, so, if knowledge was indeed power, he should be a man who has no business even as a candidate for the job of the emperor. Marcus Aurelius seemed to have answered, knowledge is power in words but will his choice of an heir affirm he believes and teachings?

If you have guessed by now, your guess is likely to be right. Commodus is named the next emperor. It appears at this point, it not about ‘know-how’ of an emperor’s job but the ‘Know-who’. The knowledge that gives power is reduced to a knowledge of who rather than what or even how. This article, therefore, explores at its essence the ‘know-why’ of power.

The reign of Commodus marked the beginning of the fall of the Roman Empire, the end of the era called, Pax Romana. Commodus practically resigned from all responsibilities and handed the reign to Cleander, a Phrygian slave. A man who schemed for more power, even a conspiracy to murder Commodus, one Commodus escaped miraculously. The tragedy of Commodus’ reign was his murder by Narcissus after the emperor decided to fight as a gladiator, against the advice of the senate.

Commodus fought as an attempt to win back the trust of the people for which Cleander’s epic failure had lost. There were riots and chaos by the people and the emperor was going to fight in the arena, a noble gesture it will seem, but just as the man he was, he cheated. He cheats in the fight by giving the other warriors dull blades, yet again, he did not have the knowledge or discipline of the arena but had the ‘power’ to do as he pleased. To do as emperor what he wished without knowledge, he had hurried to his own death, murdered by an old champion of the arena, a man who revenged the murder of his friends in the arena. Commodus scared his legacy as perhaps an emperor not to be remembered, at least not for the right reasons.

The central question is, why did Marcus Aurelius forsake the knowledge that preserved him, swayed by the social connection to his son, preferring willful ignorance to the wisdom of his own meditations? The answer appears in the word, knowledge from whose etymology is ‘acknowledge’. Knowledge is therefore only powerful to the extent that it is acknowledged. Commodus was the prince, recognized as the next emperor irrespective of his competence. Power is derived from recognition and that is exactly what the ancient ‘Scientia potentia est’ means. What is recognized is, therefore, more important as a source of power than the best techniques or facts known.

A classic example of how superior knowledge may mean little without recognition is the technique of underhand free throw in basketball. The science proves that one is less likely to miss a throw with this technique but its notoriety as the ‘granny style’ makes it almost an unthinkable option for players although it is scientifically more effective. So yes, know-how, know-what and even know-who may not always be power but knowing why a group of people acknowledge something is surely power. Acknowledged knowledge and social recognition are definitely more powerful than superior knowledge.

So the next time you drive through the University of Ghana, appreciate the essence of the statue as an effort to recognize knowledge’s place in our society. Anytime you see the statue, be reminded and recognize that knowledge is indeed more powerful than money because even money is a fictional creation of men who knew what society will recognize in exchange for value.

This article seeks to humbly suggest to you to examine the things you have recognized and more importantly why you recognize those things as superior and by such have given power. Let us, as a society, examine the things we acknowledge as our communal wisdom, and let us scrutinize it for virtuousness. It is my hope by such know-why we will align power appropriately to where it belongs; for power must belong to wisdom, purpose, courage, justice and prosperous and happy society. And aww, never think of knowledge as chewing, pouring and passing.

In conclusion, I have documented knowledge of why it is time for the African to ‘Be The Difference’, a book I truly believe has the necessary principles and discussions to transform a person’s life, but as with all forms of knowledge that is power, it must be acknowledged. The beauty of the book is that it is acknowledged by Uncle Ebo Whyte as it bears his picture and tells of his journey of transforming himself to become the man who has produced 45 plays, including the upcoming, Final Warning (a play you must definitely see). The book also has the foreword from Rev. Albert and Comfort Ocran. It appears this project has received some significant recognition by great sons of Africa and so it is time for you to reach out for a copy from the SU Bookshop at the SU Towers, Ridge and let us treasure knowledge, praying we may rebuild Africa not as Commodus ruined Rome, for indeed, acknowledged knowledge sure is power.

My name is Yaw Sompa, I am an African Child who believes in the future of our continent.