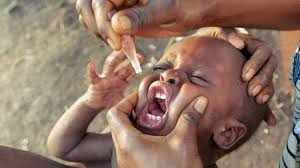 The second round of polio immunization has started in the Bono, Bono East and Ahafo Regions.

The exercise has become necessary following an outbreak of Acute Flaccid Paralysis in the Bono, Bono East and Ahafo Regions in 2019.

The four-day exercise which begins today 5th February to 8th February 2020 is expected to cover about 577,000 children less than five years in the three Regions.

Dr. John Ekow Otoo, the Deputy Director of the Ghana Health Service in the Bono Region in charge of Public Health indicated that this exercise is to ensure that the children are protected from the disease.

“Fortunately for us, we have not recorded any more cases after the three cases that we had already. But as part of the strategies to ensure that the children are protected, it is important that every child receives at least two doses of the oral polio vaccine. So we are organizing this round which is Round 2. We did the Round zero which involved only six districts. In the Round one, all the 29 districts in the Bono, Bono East and Ahafo regions were involved. We are repeating the same exercise in all these districts. So the focus is to make sure that all children less than five years in these regions are protected,” he said.

The early part of January this year saw Ghana Health Service embarking on a 5-day polio vaccination exercise in the Oti Region.

The exercise was targeted at foiling a resurfacing of poliomyelitis in all eight districts of the region following the record of a case in the Nkwanta North district of the region.

Polio, short for poliomyelitis, is an infectious disease caused by the poliovirus.

In about 0.5 percent of cases, there is muscle weakness resulting in disabilities.