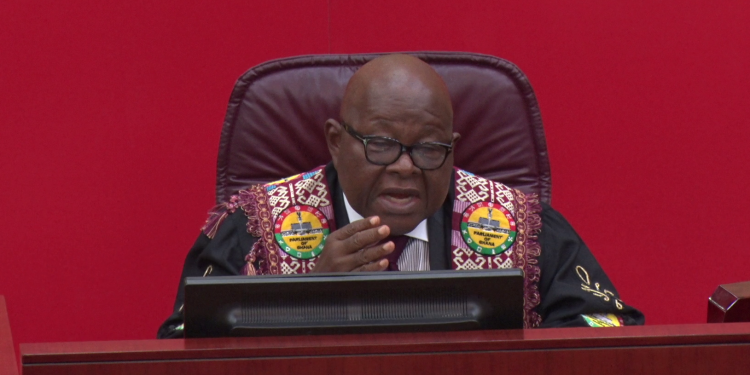 The Speaker of Parliament, Prof. Mike Oquaye has put on hold a request for the House to probe the Airbus bribery scandal.

The House approved an agreement for the purchase of the Airbus CASA 295 military aircraft after a heated debate in 2011.

A recent judgment on the airline’s procurement processes in the UK and US alleging the payment of bribes in exchange of high-value contracts has re-ignited calls for public scrutiny.

Assin South MP, Rev. John Ntim Fordjour, presented a statement to the house urging members to set up a full-blown parliamentary inquiry into the matter.

“Mr. Speaker, with due regard for the diligent commitment exhibited by President Akufo-Addo in respect of the judgment by the UK and USA courts in relation to the Airbus SE bribery scandal, as demonstrated by promptly charging the Office of the Special Prosecutor to collaborate with its UK counterpart to conduct inquiry into determining the complicity or otherwise of any Ghanaian government official, past or present and to take the necessary action required by Ghanaian law, I, in the spirit of patriotism, do accordingly implore the House to explore our legitimate option fortified by Order 191 of the Standing Orders of the Parliament of Ghana, to conduct inquiry into the matter, as an independent institution, to establish complicity or otherwise of Ghanaian government officials, past or present, relative to this Airbus bribery scandal,” he requested.

But after a debate on the Floor of the House, the Speaker of Parliament ruled that the matter has been put on hold, and will be revisited due to its complexity.

“As a House of debate, this House has competently, generally, dealt with this matter, considering the circumstances of this matter in its totality and the technical prerequisites for examining it in full and mindful of the referral already to the Special Prosecutor’s Office and not forgetting that at any time, this House can by any of its appropriate procedures go further into the matter. We will hold our horses by what I will rule now and we shall revisit it in due season,” he said.

Minister for Monitoring and Evaluation, Dr Anthony Akoto Osei has said the Office of the Special Prosecutor should be allowed to investigate the Airbus scandal since the issues involved are beyond Parliament.

Some had called for a parliamentary enquiry into the scandal but speaking to Citi News, the Old Tafo MP indicated that Parliament should allow the special prosecutor to deal with the scandal.

“Any Parliament should always be interested in issues that have to do with value for money but what is happening is not value for money. It is about bribery, that’s beyond Parliament. It is not something that Parliament will pursue,” he noted.

“Now that it has come up, Parliament can decide the best way to do it but we are not talking about value for money here. We should allow the Special Prosecutor because it is an issue of bribery and corruption. That is what the law says they should look at.”

Aircraft manufacturing giant, Airbus, has been in the news for the past few days after it agreed on a legal settlement of about £3 billion over its involvement in an alleged bribery scandal between 2009 and 2015 in various markets including Ghana.