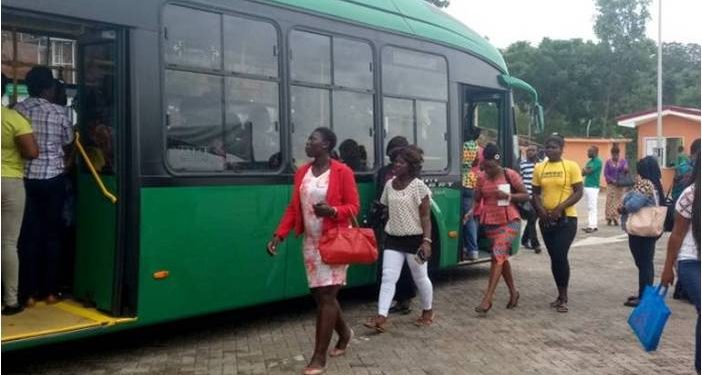 President Nana Akufo-Addo has directed the Minister for Finance and the Minister of Transport to work together to ensure the urgent resumption of the Aayalolo bus service which has been halted due to financial challenges.

The Greater Accra Passenger Transport Executive (GAPTE) on Thursday said it had temporarily grounded its Aayalolo buses due to losses it has been incurring following the social distancing protocols announced by the President and subsequent partial lockdown of Accra.

Public Relations Officer of GAPTE, Fred Chidi, told Citi News that “Because of social distancing, we have decided not to take full capacity. Now you know that for 25 passengers, the revenue stream would be less…What we did was to make a proposal to the Ministry of transport. They requested to see revenue projections to see how much money will be generated from 25 passengers.”

The Minister for Information, Kojo Oppong Nkrumah at a press briefing on Friday said the President wants the service to be immediately resumed in order to support the movement of persons offering essential services as the Greater Accra Region observes the partial lockdown declared last week.

The Minister said Finance Minister, Ken Ofori-Atta as well as the Transport Minister, Kweku Ofori Asiamah are to collaborate to solve the financial issues and allow the buses to resume work.

“Yesterday we were informed that Aayalolo has halted service for some financial reasons. There was a cabinet meeting in which the President instructed the Minister responsible for transport and the minister responsible for finance to quickly get together to resolve whatever bottleneck there may be there for which reasons Aayalolo suspended services yesterday [Thursday]…At this critical time when you are asking people to socially distance on transport, you must ensure that the state transports like Aayalolo are functioning,” the Minister noted.

Following the coming into force of the lockdown in Accra, some essential service providers such as nurses and bank staff have complained of the difficulty in reaching their places of work due to the conduct of some security personnel, blocking commercial vehicles from moving to the Central Business District because the drivers fail to observe social distancing on the bus.

The Aayalolo buses, which is more spacious and can allow for effective social distancing to be observed is being promoted to be used as the main mode of transport within the region.