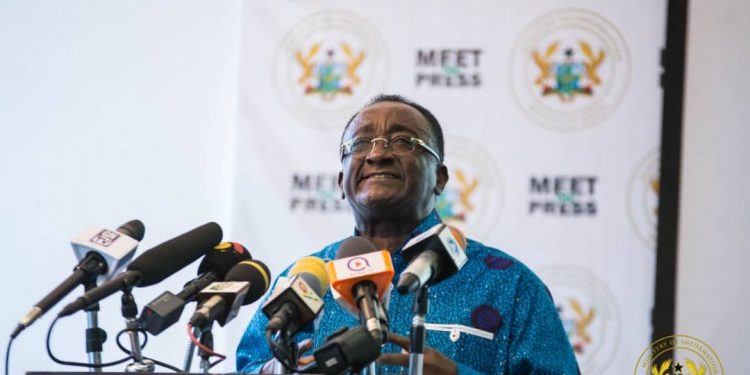 The Minister for Food and Agriculture, Dr. Owusu Afriyie-Akoto, has announced that the International Fund for Agricultural Development, IFAD, has approved a request $20 million dollars for Ghana’s food production and to deal with emergencies that may arise due to the COVID-19 pandemic.

According to him, the amount should be ready in a week or two.

The Minister, who made this known at a press briefing to address Ghana’s food security situation amidst the pandemic, also noted that IFAD is also considering another request for an amount of $90 million dollars much later.

He announced the setting up of the COVID-19 support for Agriculture and Food Security, and said an amount of GHS10, 000 had been donated as seed capital from the Alliance for a Green Revolution in Africa, AGRA, which has also offered GHS10, 000 worth of PPE for Agric Extension Officers.

Dr. Afriyie Akoto, however, did not mention specifically how much government itself was contributing to the Fund but called on others to contribute.

He said government is resolute in growing the agric sector to contribute significantly to the growth of Ghana’s economy.

“The target is to take agric growth to a double-digit of 10% in the next two to three years”.

He said for the start of the planting season, he will visit ten regions to monitor activities by farmers and assess the implementation of Government’s support programmes.

The Minister said Ghana’s food security is assured, and that the country faces no shortage in spite of the Coronavirus pandemic. He insisted that food has been available and at cheaper prices generally gone down due to the success of government’s flagship programme, the Planting for Food and Jobs Programme.

The Minister further noted that Ghana’s main ways of managing the food outlets have been exporting to West African neighbours. He said currently about 19 food items are being exported to countries such as Nigeria, Niger, Ivory Coast, Burkina Faso, Togo and Mali.

“Ghana has suddenly become a food basket where we are sending about 19 different food items to a lot of our West Africa neighbours,” he said.

The Minister commended farmers and all other stakeholders in the Agricultural value chain for ensuring the availability of Food during the partial lockdown and beyond.

Commenting on the government’s flagship programme, the Planting for Food and Jobs which is in its 4th year of implementation, he said the distribution of subsidized seed inputs and fertilizers nationwide is ongoing.

“Other modules of PFJ, such as planting for export and rural development, rearing for food and jobs, the greenhouse villages and agricultural mechanization are all being pursued relentlessly.”

He said they’re on course to meet production targets and produce for 2020 with the support of the Ministry of Finance and development partners led by the International Fund for Agricultural Development, IFAD, through the GACIP project.

The Minister admitted that the COVID-19 pandemic provides a golden opportunity for Ghana to optimize its penchant for food production to meet domestic needs, grow agricultural exports and create jobs for the youth of the country.

“Due to an export ban in countries from where we export food like rice and poultry, it provides a compelling situation for us to put strategic measures in place to ramp up production for all our key commodities. It also gives us the opportunity to intensify agro-processing, that’s reducing post-harvest losses and ensuring all-year-round food and ability whiles creating the needed jobs”.

He said since the COVID-19 outbreak, MOFA has engaged various stakeholders for immediate response to the disease and also design post-COVID-19 actions.

“Some of the immediate actions include market surveillance; where market prices and food availability on the market are monitored, PPE for extension agents, development of guidelines for the production, public education; facilitating food distribution and others. Medium-term actions such as facilitating access to critical producers, aggregators, processors and support the Buffer Stock Company of the Ministry to mop up a strategic stock of food security, re-establish early warning systems to provide regular update on food production and an establishment of COVID-19 support for Agriculture and Food Security”.

The Minister said efforts were being made to add value to agricultural produce through agro-processing to create more jobs.

“We need the capacity to boost agro-processing and create more jobs in the value chain. In 2 or 3 years Ghana wants to be self-sufficient in rice production. The total local rice production in 2019 was 665,000 metric tons. This has been caused by the Quantity of improved yields of rice distributed across the country”.

“Total local capacity of milling is only 400,000 metric tonnes, and the plan is to reach 1.2 million metric tonnes. Even the local capacity of 400,000 tonnes, they’re doing only 40 per cent due to lack of working capital to buy the paddy from the farmers to mill. MOFA is working on this with a proposal for financing for millers. It will be an unprecedented package which will be the wake-up call for agricultural credit” he noted.

On poultry, the Minister said the struggles were largely as a result of the importation of feed which makes local poultry farmers unable to compete hence the huge amounts spent on imported chicken.

“It’s a shame that we import 350 million dollars’ worth of poultry into Ghana. The poultry feed problem is being dealt with by our decision to make soybean one of the six main food crops under PFJ which is used for poultry feed, and so things would improve”.

On food storage, the Minister said some of the 80 warehouses under construction across the country with 1,000 metric tons capacity each would be completed by the middle of this year.

The capacity of all that put together is 80,000 metric tons, he said.

He, however, says more warehouses would be built going forward because Ghana needs to reach a 200,000 metric tons warehouse capacity.