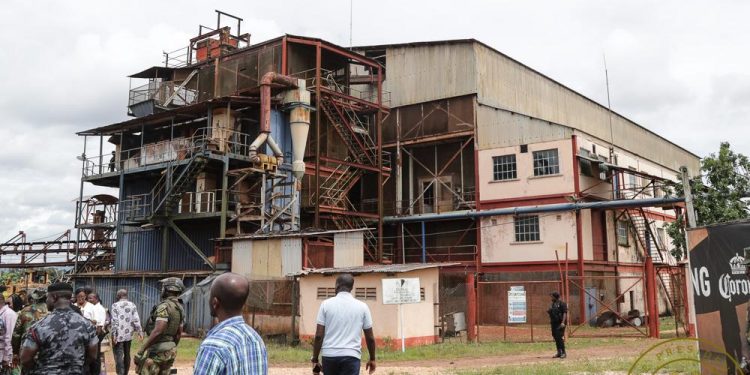 A group calling itself the Akwatia Development Association is appealing to the government to reconsider its decision to appoint Enoch Baah as the new Managing Director of the Great Consolidated Diamonds Ghana Limited (GCDGL).

According to the group, Enoch Baah, who once headed the mining firm allegedly ruined it.

It will be recalled that following the takeover of GCDGL, President Akufo-Addo assured the Chiefs and people of Akwatia that government will do all within its power to revive the erstwhile diamonds company and that all bottlenecks will be cleared to get the mine to function again by finding the right investors.

In an interview with Citi Business News, Vice President of the group, Kwadwo Obeng Darko, said the appointment of Enoch Baah is inappropriate.

“We cannot accept the reappointment of Enoch Baah, not his personality but the principle behind it. He was appointed as the General Manager of the erstwhile JOSPONG Reconsolidated Diamonds Limited and he supervised a lot. It was during his time that people had to mine the houses, the roads and all that and that caused the Akwatia Development Association to raise the alarm. Our belief is that there are more youth in the system. We believe government can appoint any other person but not the same person. It’s unacceptable,” he said.

The group in an earlier statement also said they will not accept any new appointments by the government, which suggests that the government wants to take over the complete operations of the company without looking for a new investor.

They are asking the government to put up the mine for tender to enable competent investors take over the affairs of the company.

“Notwithstanding the posture and resolve of Government to revive the mines again, the appointment of new management teams after the work of the IMC only seems to suggest that government intends to take over the operations of the mines.”

“This could not be true, because we have come to believe that the existing challenges of the mines which have been created by successive unsuccessful takeovers will be better resolved by a more competent investor with sufficient track record and proven expertise in mining, to enable a turnaround of the company and revive the mines again.”

“The Akwatia Development Association would like to draw the government’s attention to promises made to revive the mines. The Association strongly recommends that Government puts up the mine for tender to enable competent investor(s) to take over the affairs of the company,” they noted.

Last year, the Akwatia Development Association petitioned the government to speedily halt the operations of the Great Consolidated Diamonds Ghana Limited, a subsidiary of Jospong Group of Companies in the area.

According to them, the new management of GCDGL had not fulfilled its promise of making the company commercially viable by creating both direct and indirect jobs for residents.

GCDGL began operations on August 23, 2011, with the promise to invest US$100 million in a five-year period and produce one million carats of diamonds every year within the period.

On September 20, 2019, the government announced the abrogation of the contract awarded to GCDGL in 2011 to mine diamonds at Akwatia for breach of contract.

Government accused the company of failing to fulfil its core mandate of paying US$17 million to the Divestiture Implementation Committee, DIC, as well as rehabilitating and refurbishing facilities at the mines to enhance production.

In response, the Jospong Group of Companies which took ownership of the GCDGL from the government’s Divestiture Implementation Committee in 2011 said the government, through the DIC, had acted without following due process.

The company said the government was wrong in taking over the company while they were challenging the legality of the contract aggregation in court.

The company also said the action by the State Interest and Governance Authority was “illegal, unconstitutional and regrettable in a nation that is governed by the tenets of democracy.”