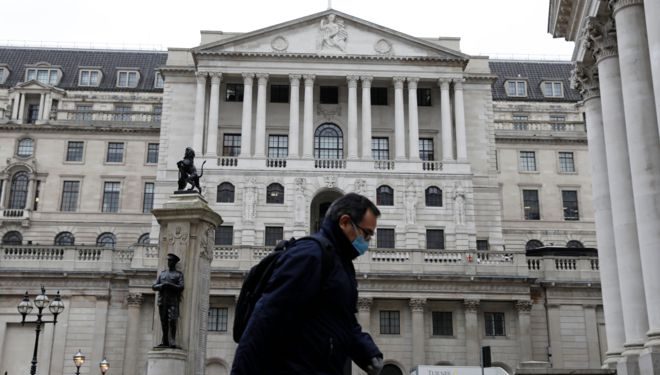 The Bank of England has warned that the coronavirus pandemic will push the UK economy towards its deepest recession on record.

It said the economy was on course to shrink 14% this year, based on the lockdown being relaxed in June.

Scenarios drawn up by the Bank to illustrate the economic impact said Covid-19 was “dramatically reducing jobs and incomes in the UK”.

Policymakers voted unanimously to keep interest rates at a record low of 0.1%.

However, the Monetary Policy Committee (MPC) that sets interest rates was split on whether to inject more stimulus into the economy.

Two of its nine members voted to increase the latest round of quantitative easing by £100bn to £300bn.

The Bank’s analysis was based on social distancing measures being gradually phased out between June and September.

Its latest Monetary Policy Report showed the UK economy plunging into its first recession in more than a decade. The economy shrinks by 3% in the first quarter of 2020, followed by an unprecedented 25% decline in the three months to June.

This would push the UK into a technical recession, defined as two consecutive quarters of economic decline.

The Bank said the housing market had come to a standstill, while consumer spending had dropped by 30% in recent weeks. 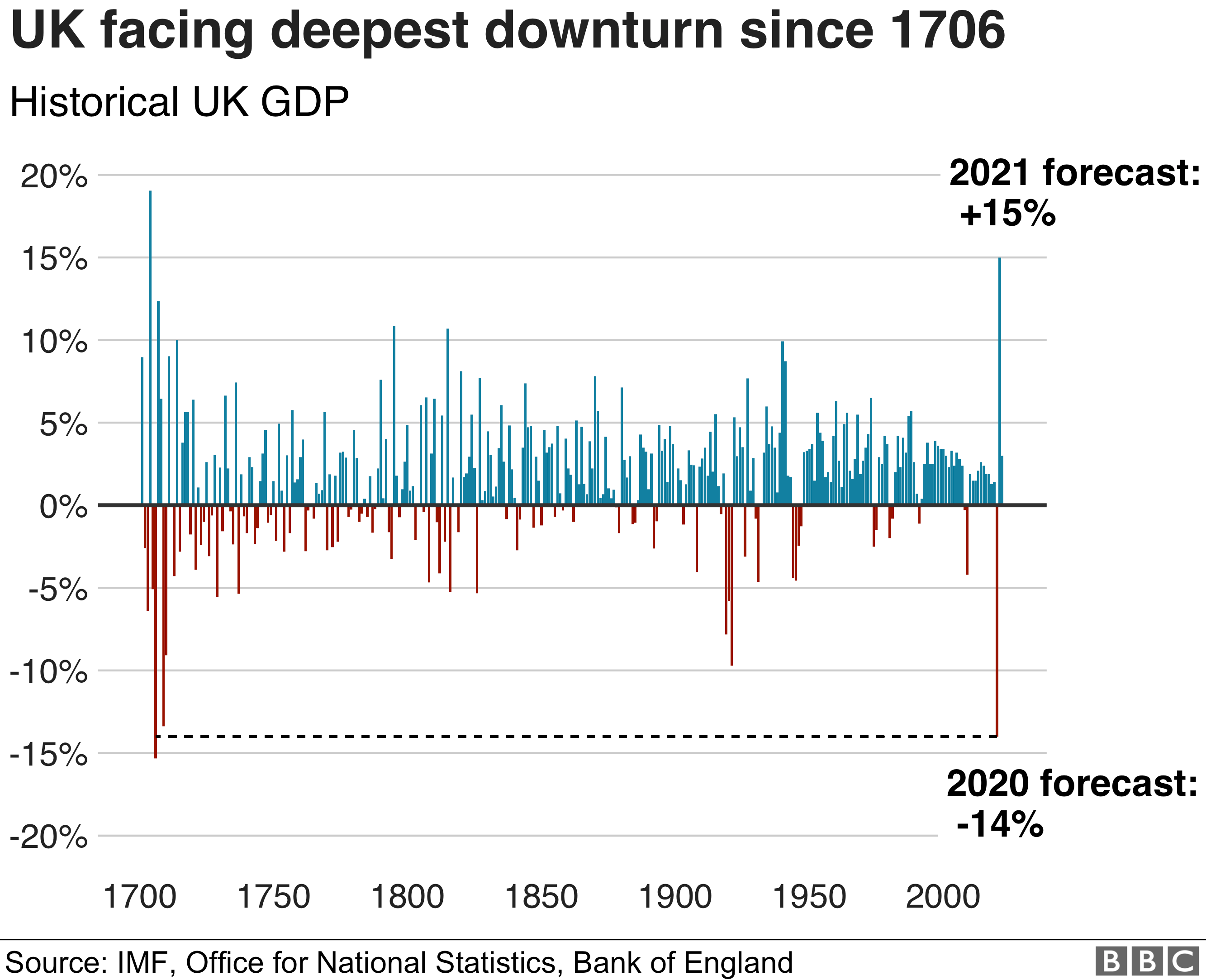 For the year as a whole, the economy is expected to contract by 14%. This would be the biggest annual decline on record, according to Office for National Statistics (ONS) data dating back to 1949.

It would also be the sharpest annual contraction since 1706, according to reconstructed Bank of England data stretching back to the 18th Century.

While UK growth is expected to rebound in 2021 to 15%, the size of the economy is not expected to get back to its pre-virus peak until the middle of next year.

Andrew Bailey, Governor of the Bank of England, said he expected any permanent damage from the pandemic to be “relatively small”. The economy was likely to recover “much more rapidly than the pull back from the global financial crisis,” he said.

Mr Bailey also praised the action by the government to support workers and businesses through wage subsidies, loans, and grants. He said the success of these schemes and the Bank’s own stimulus meant there would be “limited scarring to the economy”.

James Smith, research director at the Resolution Foundation, said the hit to the economy this year was equivalent to £9,000 for every family in Britain.

He said: “Faced with this huge economic hit, both the Bank and the Government have made the right call in taking bold action to protect firms and families as much as possible.”

The UK government is expected to start easing lockdown restrictions next week.

The Bank stressed that the outlook for the economy was “unusually uncertain” at present and would depend on how households and businesses responded to the pandemic.

It assumes job losses and shrinking pay packets will continue to weigh on the recovery, with British families remaining cautious about shopping and socialising for at least another year. 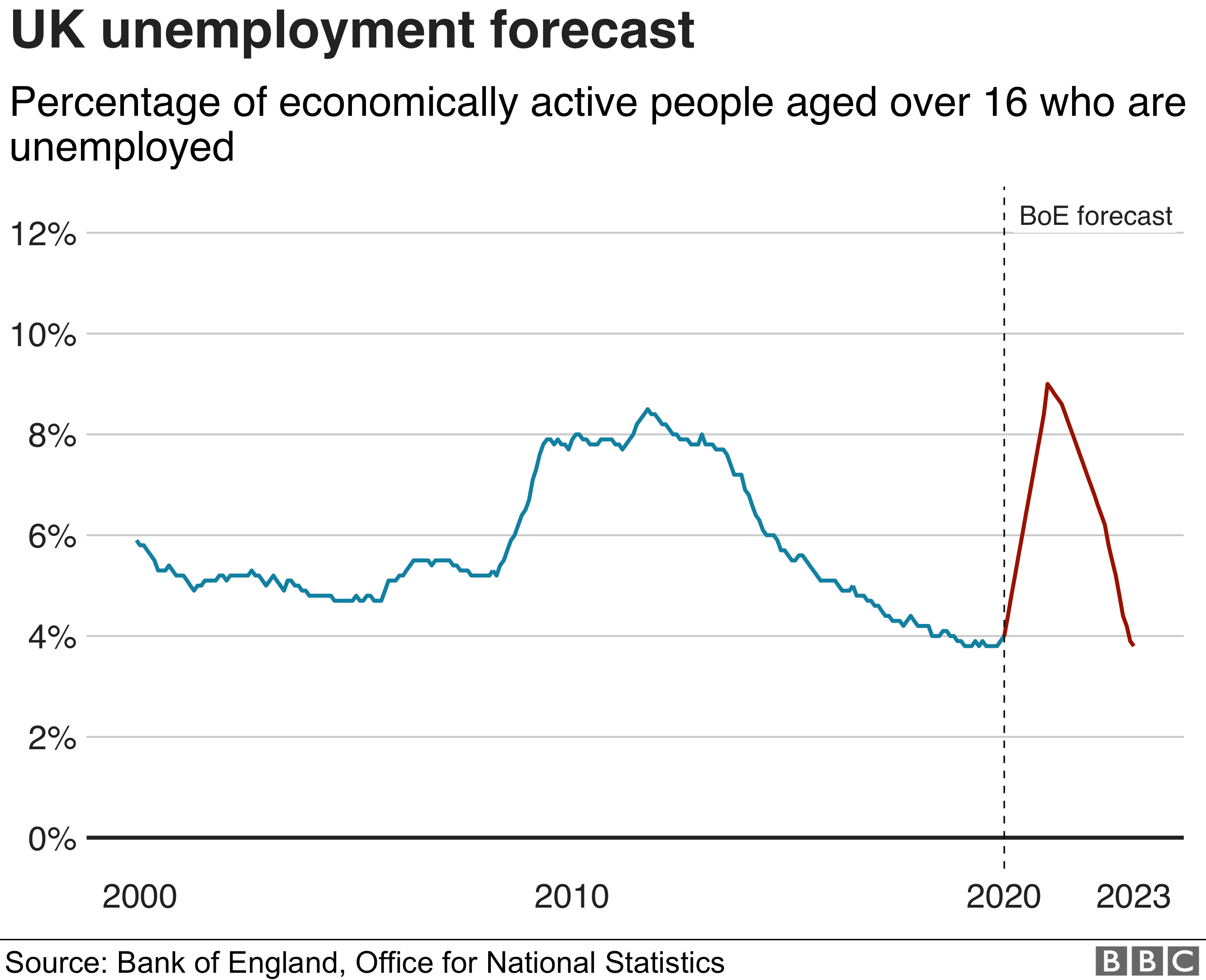 Average weekly earnings are expected to shrink by 2% this year, reflecting the fall in wages for furloughed workers.

The Bank said sharp increases in benefit claims are “consistent with a pronounced rise in the unemployment rate”, which is expected to climb above 9% this year, from the current rate of 4%.

Under the Bank’s scenario, inflation, as measured by the consumer prices index (CPI) falls to zero at the start of next year amid the sharp drop in energy prices.It is also expected to remain well below the Bank’s 2% target for the next two years. 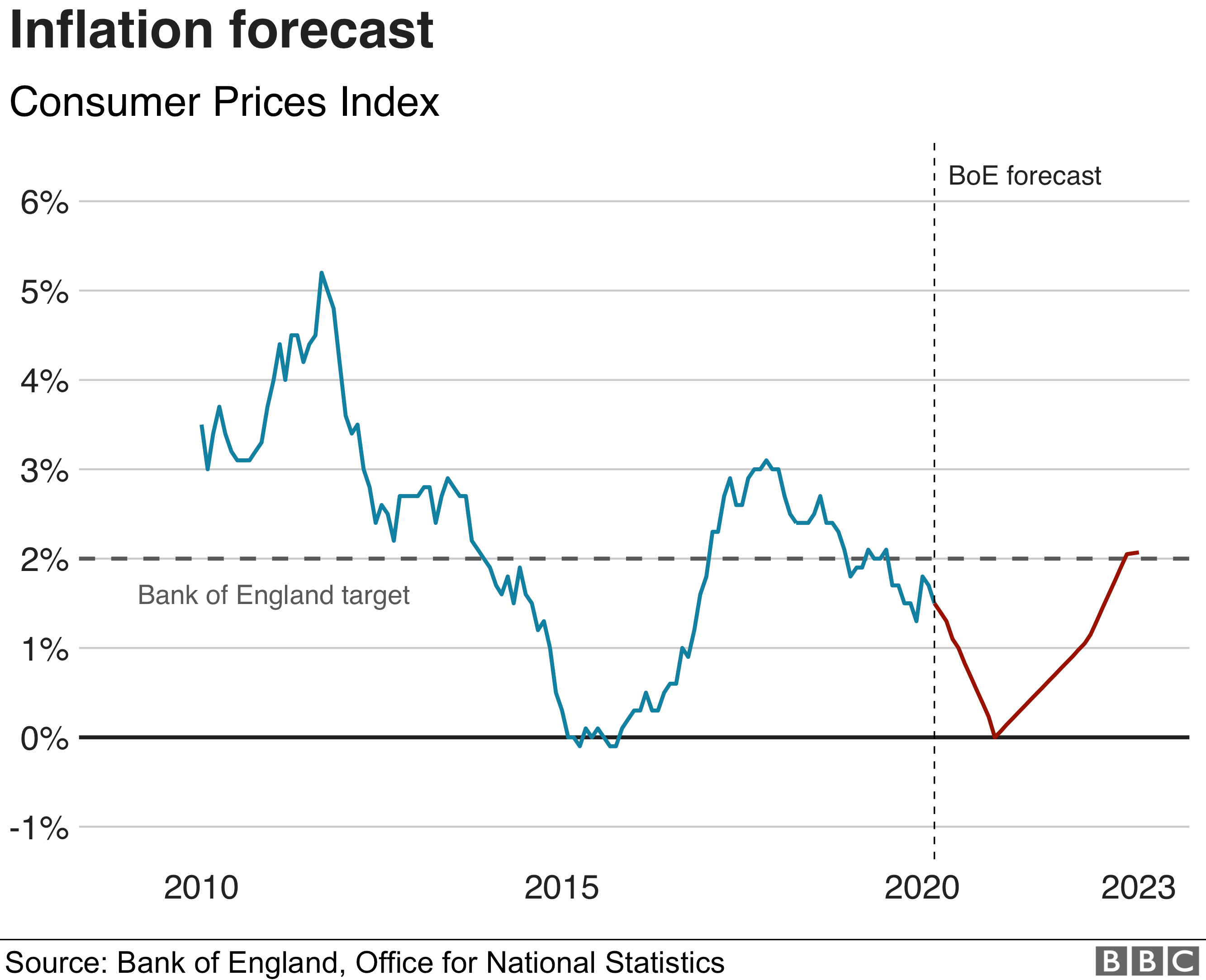 The Bank’s latest Financial Stability Report said the Bank’s scenario was consistent with a 16% drop in house prices. The latest figures published by UK finance show one in seven mortgage holders have taken a payment holiday due to the coronavirus.

The Bank said the number of new mortgage deals on offer had halved in just over a month as banks focused on the deluge of payment holiday requests. This includes a huge contraction in deals for buyers with a deposit of less than 40% of the purchase price.

The MPC also highlighted the stark drop in consumer spending. It said spending on flights, hotels, restaurants, and entertainment has dropped to a fifth of their previous levels.

Shopping at high street retailers had dropped by 80%, while business confidence was described as “severely depressed”.