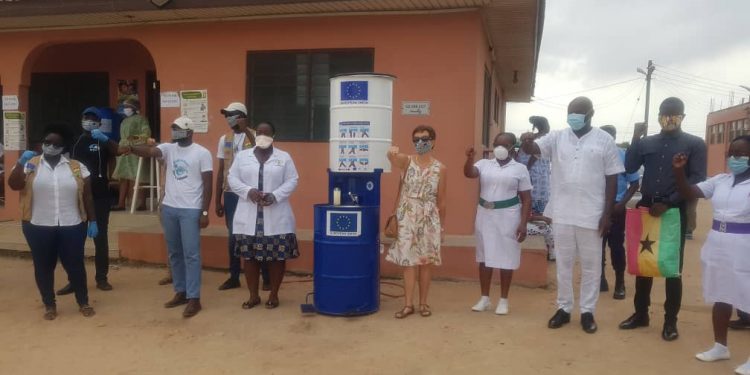 As part of its contribution towards the fight against the spread of the COVID-19 coronavirus disease in Ghana, the European Union Delegation to Ghana in partnership with the environmental NGO, Plastic Punch, has donated a hand-washing machine to the LEKMA Polyclinic at Nungua in the Krowor Municipality of the Greater Accra Region.

Speaking to citinewsroom.com, the Head of the European Union Delegation to Ghana, Diana Acconcia, said the gesture is a reminder of EU’s solidarity within its member countries and outside countries like Ghana as the world battles the COVID-19 health crisis.

She said even though the EU has been badly hit by the pandemic, the organisation has allocated 20 billion euros to support health campaigns in other countries to prevent the spread of the virus among larger populations.

She said the EU has partnered the government of Ghana to assist polyclinics in deprived communities with handwashing stations and reusable nose masks as part of measures to curb the spread of the virus.

Receiving the device, the Medical Officer in charge of the facility, Dr. Fauzia Amidu, thanked the EU Delegation for the donation, and appealed to benevolent organisations to support community health facilities with medical essentials.

The Municipal Chief Executive of the Krowor Municipal Assembly, Joshua Bortey, said the Assembly has set up a special task force to educate community members about the disease and its modes of transmission, as well as preventive measures such as regular handwashing.

He said personnel from the Ghana Police Service have been stationed at two special road barriers created within the municipality to ensure strict adherence to social distancing and the wearing of face masks.

The Director of Plastic Punch, Richmond Quarcoo, advised the public to cooperate with authorities as they enforce government’s directives aimed at minimising the impact of the pandemic in the country.