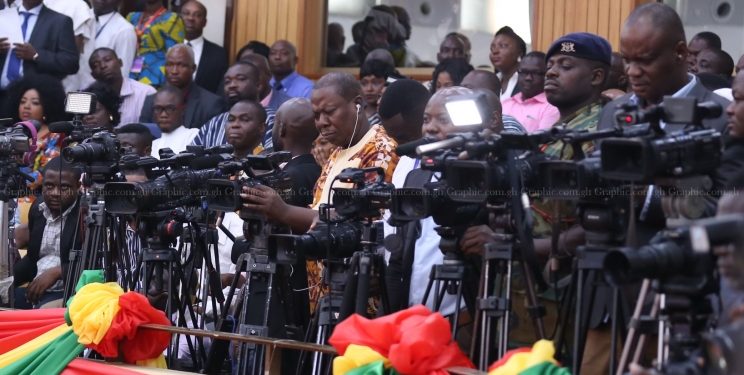 Exactly a month ago, I wrote an article with the headline “The Media deserve a stimulus package” where I advocated the need for the government to assist all media houses in the country with some relief items considering the enormous role they are playing in the fight against the spread of the novel Coronavirus (COVID-19).

I, among other things, proposed to the government to consider the following:

1. Waving the cost of renewing frequency authorization at least for one year.

2. Pay the cost of electricity bill covering a period of six months.

3. Pay the cost of water bill covering a period of six months.

My proposal was premised on the GH₵1billion stimulus package under a Coronavirus Alleviation Programme (CAP) announced by the President, His Excellency Nana Addo Dankwa Akufo-Addo, on Friday, March 27, 2020.

The amount is to mitigate the impact of the coronavirus on businesses and households and ensure job losses are minimized.

My call for a stimulus package for the media was re-echoed by the Ghana Journalists Association, Ghana Independent Broadcasters Association (GIBA), Association of Women in the Media (ASWIM), and the Private Newspaper Publishers Association of Ghana (PRINPAG) at a joint press conference held at the Accra International Press Center on April 8, 2020.

At the event, three things stood out among the proposals presented by the group for government’s consideration. They include:

b. transport for journalists by way of Ayalolo buses or other means, and

c. the setting up of a COVID-19 Media Alleviation Fund in line with what has been established at the COVID-19 National Trust Fund.

The topmost priority among the three items was the proposal for the establishment of a COVID-19 Media Alleviation Fund which was championed by the President of PRINPAG, Mr. Andrew Edwin Arthur.

This COVID-19 Media Alleviation Fund, according to Mr. Arthur, should be managed by an independent body that would receive proposals and vet them and decide on which support is appropriate for an individual organization.

He said the same body should institute insurance packages out of the fund to support media professionals. “PRINPAG believes that these would go a long way to embolden Ghana’s media”, he noted.

Much as I support the establishment of the COVID-19 Media Alleviation Fund which if implemented will provide some relief items to support media houses, I do not subscribe to the setting up of an independent body to manage the fund.

I say so because the disbursement of the Media Development Fund that was set up by President John Evans Atta-Mills of blessed memory is a case study to guide all of us.

The Fund was aimed at training and building the capacity of media practitioners to deliver better results in terms of prosecuting their various mandates for the development of the country.

However, to date, no proper accountability has been rendered as to how the Fund was utilized.

In January 2015, then Dean of the Parliamentary Press Corps (PPC), Mr. Andrew Edwin Arthur who is now the President of PRINPAG, demanded the whereabouts of the Fund when he delivered an address at the end of year party for the Corps.

“It is regrettable that such a laudable initiative has been abused by those who were expected to handle it, and I believe it will not be too much to call on the managers of the Fund to come out and let the Ghanaian media know the current state of the Fund”, he noted in his address.

It is on record that some monies were released to the then Ministry of Information as the Media Development Fund, it still remains a fact that no proper accountability has been rendered.

I believe strongly that it was based on this scenario that the President of PRINPAG called for an independent body to manage the COVID-19 Media Alleviation Fund.

Whatever it is, the fact still remains that a body was mandated to manage the Fund but failed in its mandate.

Therefore, the purpose of establishing the Fund was not realized.

Since the outbreak of the Coronavirus which has so far, according to www.worldometers.info infected 3,593,652, people worldwide, with 249,112 deaths and 1,166,079 recoveries, media houses in Ghana have not been spared the brunt of this virus.

The practice of containment measures such as social distancing has resulted in a lot of media houses informing some of their staff to either proceed on leave or work from home while rotating the few that have been asked to report to work.

Some media houses have even gone to the extent of mutually terminating the employment contract they have with some of their staff. This is a measure to cut down cost while sustaining the business.

Advertising has sharply dropped since businesses are adopting cost-cutting measures to mitigate the impact of COVID-19.

Events and promotions account for a chunk of revenue to many media houses. However, COVID-19 has shut the doors to all out-door events.

Some of the private print media houses are even struggling to produce either on a daily or bi-weekly basis.

Production cost is weighing heavily on the media houses.

However, in spite of these challenges, the media houses have lived up to expectation, especially, regarding coverage of COVID-19.

I will, therefore, propose that the stimulus package being considered by the government for media houses must include the following to ensure fairness or equitable distribution of state resources:

By so doing, media houses could retain the majority of their staff if not all, thereby, preventing massive job losses in the industry.

A well thought out plan for the implementation of the aforementioned proposals will avoid bickering among those that will be deprived of these relief items and the government will have its peace of mind.

The author of this article, Stephen Odoi-Larbi, works with Kasapafmonline.com and is a member of the Parliamentary Press Corps (PPC).