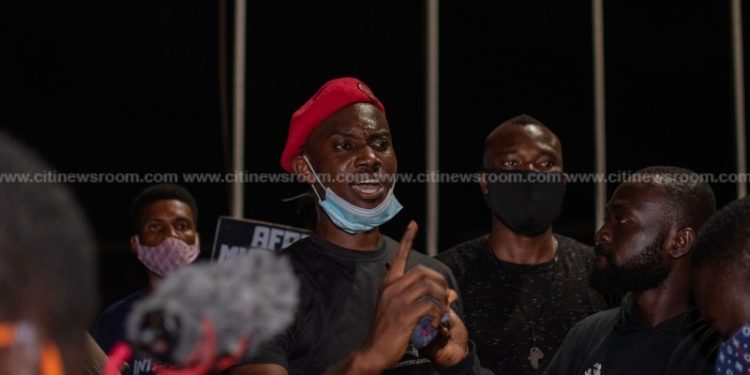 Leader of the Economic Freedom Fighters, Ernesto Yeboah is still in police custody despite meeting bail conditions set by the Circuit Court on Thursday, June 11, 2020.

Mr. Yeboah’s lawyer, Sammy Darko said his client is still in police custody due to delays in verifying the residence of sureties standing in for the latter.

“The reason Ernesto although has been granted bail by the court but is still in custody is because by the time the Police finished verifying the sureties and where they lived, the court had closed and so they will have to go back to the court early tomorrow.”

Mr. Darko on Eyewitness News expressed his dissatisfaction with what he called frustration in releasing his client.

He pointed out that the bail terms were harsh and excessive, given that his alleged offence was a misdemeanour.

“The law is very settled on how to execute a bail, but I do not know why there is always a problem. When you are granted bail, it is the duty of the registry of that court to determine your sureties, whether they are viable or not. If the court is satisfied with your surety, then the duty of the Police now comes in. The Police are supposed to investigate where you live in the event that if the person jumps surety then the Police can locate such a person and hold you responsible.”

He was charged with failure to notify the police of a special event contrary to section 1(1) of Act 491.

The Police had said Ernesto was arrested because the vigil, which they described as a protest, was not authorized.

Mr. Yeboah pleaded not guilty and the court granted him bail with three sureties; with two of them being public servants.