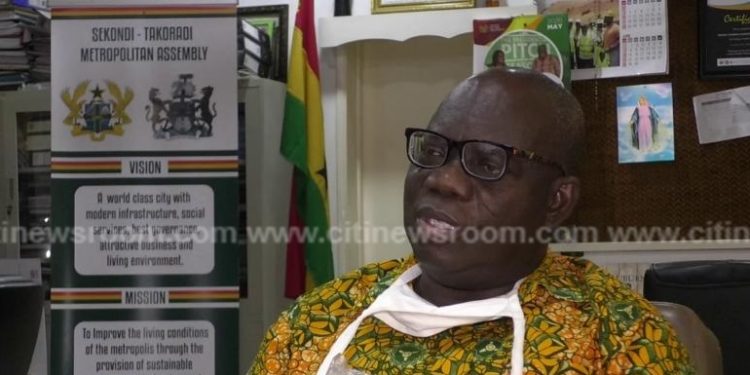 The Mayor of the Sekondi-Takoradi Metropolitan Assembly, K.K. Sam died of COVID-19.

This was confirmed by the President, Nana Addo Dankwa Akufo-Addo on Sunday, June 14, 2020.

“…Permit me to pay brief tribute to the memory of an old and valiant colleague in the struggle of the New Patriotic Party and in the work of the Akufo-Addo government, the Mayor of Sekondi-Takoradi Metropolis, the Chief Executive of the Sekondi-Takoradi Metropolitan Assembly, Hon. K.K Sam, Egya Sam to me and many, whose efforts in enforcing social distancing protocols at the Sekondi and Takoradi markets were, recently, highly commended by me, and who sadly passed away on Friday, as a result of a COVID-related death. May his soul rest in perfect peace in the bosom of the Almighty until the Last Day of the Resurrection, when we shall all meet again,” Akufo-Addo said during his 11th address to the state on measures adopted in the fight against COVID-19 on Sunday.

“Hon Sam was admitted at Effia-Nkwantan Regional Hospital on Saturday, June 6, 2020, where he received medical treatment and subsequently referred to UG Medical Centre on Sunday, July 7, 2020, for further attention,” a statement from the Sekondi-Takoradi Metropolitan Assembly noted.

The Assembly said it will announce burial preparations in the coming days.

“In the meantime, we urge the good people of Sekondi-Takoradi and Ghana as a whole to remember the family of our departed Mayor in prayers as they go through this difficult moment,” the statement added.

Mr Sam, who was sworn into office in April 2017, having been confirmed by the General Assembly on March 24, 2017, was a renowned educationist and an administrator.

Mr Sam, who hailed from Nkontompo, near Sekondi, had more than 24 years of experience as a professional teacher and a managing director in some private sector institutions both in Ghana and Liberia.

Meanwhile, the driver of the late MCE has also tested positive for coronavirus.