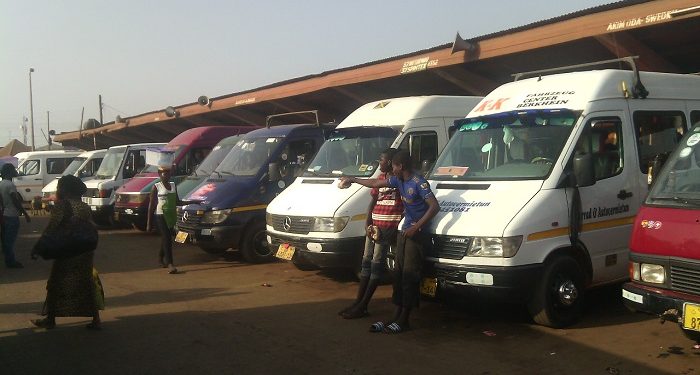 Some commercial drivers at Ashaiman in the Greater Accra Region have defended the need to maintain the current transport fares, although they have been directed to take full capacity now as part of the phased easing of COVID-19 restrictions in the transport sector.

In an interview with Citi News, the drivers attributed the decision not to reduce the fares they charge to the increment in fuel prices and not the earlier reduction in the number of passengers.

“Reducing transport fares will not help us at all so we prefer to maintain the existing fares. The reason we increased the lorry fares was because of the increment in the fuel prices and not because of the number of passengers”, one of the drivers explained.

Road Transport Operators in consultations with the Ghana Private Transport Union (GPRTU) and the Ghana Road Transport Coordinating Council, in March, announced some measures to ensure social distancing among passengers in commercial vehicles.

This move was among others aimed at ensuring that the precautionary directives given by President Nana Akufo-Addo on social distancing were observed on all public transport vehicles and terminals to prevent the spread of COVID-19.

Commercial vehicle drivers, following this directive, lamented the low level of revenue gotten from the business due to the reduced number of passengers in the vehicles demanding an increase in transport fares to make up for the losses made while obeying the order to ensure social distancing in their vehicles.

Since Saturday, 11 July 2020, however, commuters have been paying 15% more in transport fares following approval by the government for commercial transport operators to hike fares.

President Akufo-Addo in his latest COVID-19 update to Ghanaians announced that the government has taken the decision to “lift the restrictions in the transport sector, and allow for full capacity in our domestic airplanes, taxis, trotros, and buses.”

With this in mind, it is the expectation of passengers that the recent rise in the lorry fares will be further reduced to bring relief to them.

But the drivers say they will only reduce lorry fares if the government reduces the price of fuel.

“It will worry us if we reduce the fare despite the increase in the number of passengers. Our roads are not good and the car parts are expensive. Fuel is now expensive and so reducing the fare it will affect us.”

Another said, “if we are to reduce transport fares, then the government must also watch the fuel prices for us because it is killing us. The government has to do something about it for us.”

Meanwhile, the Chamber of Petroleum Consumers (COPEC) wants commercial transport operators to reduce their fares immediately as they return to taking passengers at full seating capacity.

“We are, by this statement calling on some of our major stakeholders in the transport sector including the GPRTU, Concerned Drivers Association, Committed Drivers Association and the Ghana Road Transport Coordinating Council to immediately without fail, ensure that transport fares are reversed by close of day today [Monday],” COPEC urged in a statement.