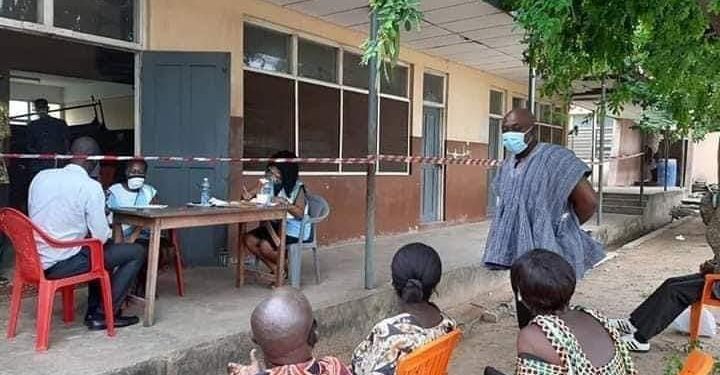 A Deputy Minister of Trade and Industry, Carlos Ahenkorah has defended his decision for stepping out and monitoring the ongoing voter registration exercise despite testing positive for COVID-19.

He admitted on Eyewitness News that his doctor had told him to self-isolate but he had to visit a registration centre to resolve some issues that had come up.

Mr. Ahenkorah insisted that he was very careful when he visited the registration centre.

“Yes, I have COVID-19 but on the first day of the registration, there was a problem at one of the centres. But knowing my status that I am asymptomatic, I visited only one centre to check on the issue. I never got in the midst of people. I drove in my car and got there, got down and spoke far away with the EC officer who explained the issue to me. I told her I will report this to their boss and then I just left. I was very careful. It is important for people like us to know their status because whether you like it or not, we will go into the midst of people”, he added.

Mr. Ahenkorah who is also the Member of Parliament for Tema West made the justification on the back of reports that he was admitted at the Intensive  Care Unit (ICU) at the Korle Bu Teaching Hospital together with the New Patriotic Party’s (NPP) campaign manager for the 2020 general elections, Peter Mac Manu after both of them tested positive for COVID-19.

He insisted that although he had tested positive for Coronavirus, he was rather at the Hospital’s isolation centre and not the ICU.

“Yes, I do have COVID-19 but I am asymptomatic. I spent a night at Korle Bu to be checked on by the experts at the Isolation Center.  My doctor took my samples and asked me to go into self-isolation which I have been since last week. So on Wednesday, I was admitted there at 5 pm. This morning [Thursday] at 11 am, he [my doctor] discharged me. I wasn’t at ICU and ICU is not the same as Isolation,” he said on Eyewitness News.

Earlier reports on Wednesday, July 1, 2020, were that Carlos Ahenkorah together with the New Patriotic Party’s (NPP) campaign manager for the 2020 general elections, Peter Mac Manu had been admitted at the Intensive Care Unit of the Korle Bu Teaching Hospital.

It came shortly after the death of the former General Secretary of the Governing New Patriotic Party, Kwadwo Owusu Afriyie, popularly referred to as Sir John.

Click below to listen to the full interview with Carlos Ahenkorah:

Let’s wake up; breaking Coronavirus protocols may be our last mistake – Rawlings warns

We’re working on speeding up testing for coronavirus – GHS

We're working on speeding up testing for coronavirus - GHS