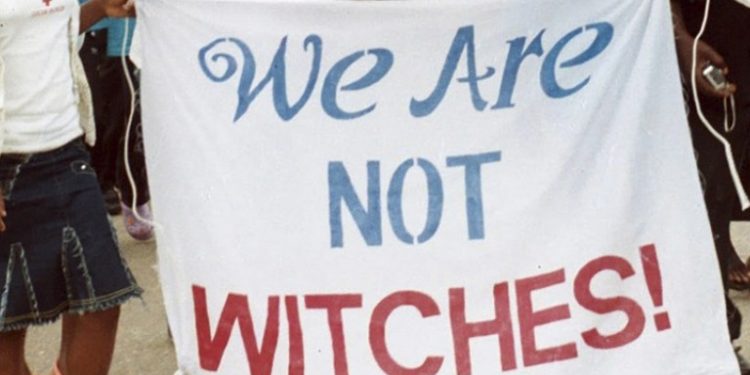 Witchcraft is deeply ingrained in the Ghanaian culture – witches and wizards are believed to hold powers for fortunes or mishaps, hence they are mostly held responsible for natural disasters, accidents, bareness and the like in some African societies. In Ghana, although the belief in witchcraft is widespread; stories that highlight the detection and abuse of accused women are mostly culled from the North, thus reinforcing the false notion that the practice is only existent or rife in Northern Ghana.

While the government of Ghana has on several occasions made efforts to tackle the abuse of accused women and close down witch camps, centres aimed at supposedly healing alleged witches are springing up in some parts of Northern Ghana in recent times. Case in point is a so-called healing centre which was set up a little over a year ago in Pulmakuom in the Pusiga District of the Upper East Region by a young man, Rufai Sumaila and his father, for the purpose of identifying and exorcising “witches”. Rufai is an SHS drop out who allegedly had mental issues, and later claimed he met dwarfs who tasked him to practice as a witchdoctor. At this base, which is near the Ghana-Togo border post at Widana, the self-styled witchdoctors claim to use sachet (“pure”) water to supposedly identify and heal witches.

A sick person who goes for healing at the centre is told their condition is caused by a family member who has bewitched them. The accused is subsequently brought to the centre to confess to his or her deeds. Those who insist on their innocence are beaten until they confess and persons who subsequently admit being witches are chained to trees, tortured and made to shave their hair. It is believed these acts will heal them.The healing centre has only caused physical and emotional pain to so many women and families, according to the Executive Director of the Sanneh Institute and a native of Widana, Prof. John Azumah. “It has broken several marriages and homes. There are stories of young women being raped and impregnated by the young men the so-called witchdoctor has gathered around himself,” he told citinewsroom.com.

He said security agencies in the area are unable to clamp down on the activities of the witchdoctor due to support from those in power. “The young witch doctor seems to have the backing of some big men who intervene and plead for him to be released anytime he is arrested for assaulting women captured at his centre. He was recently arrested but the police did not even put him behind bars and released him for fear of what they said was a security threat from residents who believe in his spiritual powers.”

Government officials reportedly also turn to the witch doctor for medical help. A bodyguard to one of the Ministers in government was recently sent to the witch doctor for healing and died a day after arrival. The deceased was conveyed to Bolgatanga to be sent back to Accra. Prof. Azumah believes it will only take the intervention of powerful persons like the President to close this healing centre.

The situation at the healing centre in Widana is quite similar to what happens at witch camps in Gambaga, Gnani, Kukuo, Nabuli and Kpatinga[all in the Northern part of Ghana] – witches are usually assaulted after being accused. Just recently, a 90-year-old woman was beaten to death in Kafaba in the Savannah Region after a soothsayer accused her of being a witch. Her lynching has triggered calls for the government to take action. It is heartening that the President and Gender Minister condemned this recent incident and promised to arrest the perpetrators. It will, however, take active measures to root out such an egregious act.

This incident should get the Ministry of Gender and Social Protection to focus on the needful – coming up with a detailed plan to tackle assault against persons accused of witchcraft. The starting point should be constant engagement with residents, opinion leaders, and chiefs complicit in the abuse. Constant engagement will halt the primitive practice of detecting and assaulting alleged witches.

Constant engagement will also stop the stigmatization of accused persons and make the reintegration of accused witches into their communities easier. The Ministry can consequently close down witch camps and healing centres, after accused persons feel safe to return to their communities. The President, the Ministry of Gender and Social Protection and other relevant stakeholders cannot fail Ghanaians on this – they must act now.