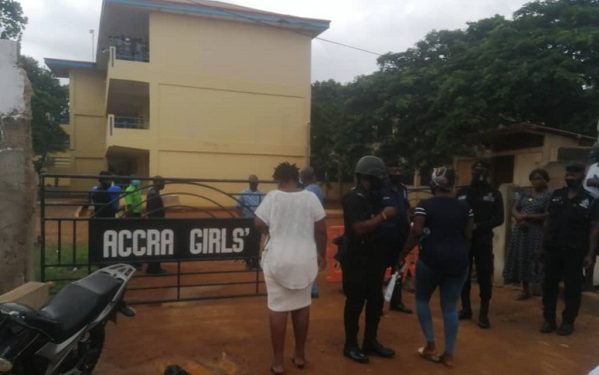 Some anxious parents have trooped to the Accra Girls Senior High school today [Tuesday] to demand the release of their wards.

The parents, who visited the school after reports that over 50 students have contracted COVID-19, were, however, prevented from gaining access to the premises.

Some of the parents accused the police of intimidation as they massed up in front of the school gate.

Others who were there to give food to their wards were also warned not to interact with journalists.

Some of the angry parents spoke to Citi News and complained that their wards were not being treated well in the school.

“Authorities are not saying anything. When other institutions recorded cases, were they not closed down? So why is that if the schools are also recording cases, why are they still opened? All the stakeholders are calling for the shut down of the schools so why don’t they want to release the children?”

“I am worried because that is my only daughter in the school so they should test the students and release my daughter for me. They should release those who are negative and handle those who will test positive. That is all that we are asking for.”

Another said: “My daughter called to complain to me that, the food they are giving is inadequate so she requested some food items. That is why I am here and we are not even allowed to see the children. I am equally worried about the increasing cases being recorded at the school but we will continue to pray for our wards.”

Last week, worried parents also went to the school to try and take their wards home.

According to some of the parents, no student was tested when schools resumed and they believe this is the cause of the current problem.

The 55 people, including students, tested positive for COVID-19 after the Ghana Health Service (GHS) commenced a testing exercise at the school.

According to a joint statement by the Ghana Health Service and the Ghana Education Service (GES), the 55 tested positive out of 314 total tests done.

“As at 13th July 2020, a total of 314 persons (student and staff) from the School have been tested. Out of these, 55 have been confirmed positive for COVID-19 while 259 persons tested negative,” the statement said.

The statement further indicated that all those who have tested positive have been sent to treatment centres.

The school confirmed six positive cases amongst students last week and it was later discovered that a teacher and his spouse had also tested positive for the disease.

This sparked protest among the student populace who insisted on going home.

At the same time, many parents thronged the premises of the school demanding that their children be allowed to go home due to the risk of remaining at the school.

But school authorities and authorities in government insisted that the school is better placed to manage the students and the risk associated with COVID-19 than being released to go home.