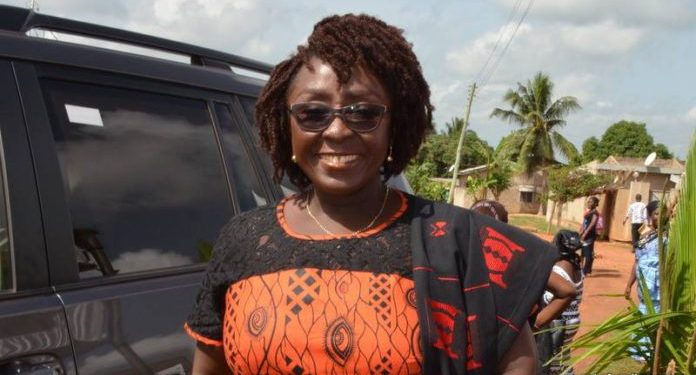 The National Democratic Congress’ (NDC) parliamentary candidate for Ketu South, Dzifa Gomashie has explained the situation behind a video circulating on social media which supposedly captured her having a heated argument with the Municipal Chief Executive (MCE) of the area.

In the 10 seconds video, she is seen to be bickering with Elliot Edem Agbenowu, the MCE, at a voter registration centre.

There were other persons seen in the video who were trying to stop the situation from escalating.

But on Eyewitness News on Wednesday, Dzifa Gomashie clarified that she was only responding to a security personnel who had disrespected her by shouting at her.

“The MCE called me and the Deputy Regional Minister and wanted to know whether we were trailing them because I was with my comrades. By the time I could answer him, this security person behind him started shouting at me. And I don’t tolerate misbehaviour like that when someone is speaking to me. [I told the security personnel that] If you also have something to say, you must wait for your turn.”

“So I was upset at the person who was disrupting my response to the MCE. There was no confrontation. I addressed the MCE and asked if he could not stop the gentleman from misbehaving towards me. And then I spoke to the gentleman who was interrupting me very rudely in Ewe. I was asking him why he was misbehaving,” she explained.

The NDC parliamentary candidate, however, stated that the reasons for which she and her team went to the registration centre were accomplished without any problems.

Commenting on the voter registration process in the Ketu South Municipality, Madam Gomashie lamented the huge number of people as compared to the few number of machines at the centres.

She further urged the Electoral Commission (EC) to increase the number of machines at the various registration centres.

“That is the problem. [There are] Too many people, [but] too few machines. This has led to long queues, and we need to ask the EC to provide us with extra machines so that this can be done in an orderly manner. Because of the huge number of people, social distancing cannot be upheld, which is really unfortunate. If we have about ten machines, I’m sure that the queues will be lesser, the social distancing can he observed, and we’ll all be safe. The EC has to take this seriously and make amends,” she insisted.