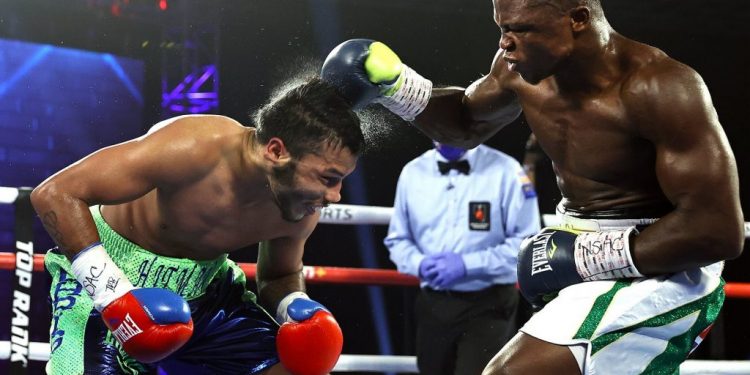 Ghanaian boxer, Isaac Dogboe returned to winning ways in Las Vegas following an 8th round knock out victory against American boxer Chris Avalos in a Featherweight fight in Las Vegas.

The fight was without spectators amid the coronavirus pandemic.

The bout, a first for Dogboe since his second defeat to Emmanuel Navarette in May 2019, was a non-title fight that still served notice that Dogboe is very well on his way back.

After deciding to move up to the Featherweight division from super-bantamweight where he was champion, the 25-year-old showed a combination of great agility and defensive superiority to overpower Avalos in a dominant fight.

THAT is how you debut in the Featherweight division. 😤@IsaacDogboe was on point the entire way, and ultimately stoped Chris Avalos in the 8th and final round.#ValdezVelez | LIVE NOW on ESPN pic.twitter.com/bfwbMafmmn

The Royal Storm started the bout very aggressively and made use of his trademark devastating body shots in rounds 1 and 2.

Avalos, who had the reach advantage in the fight tried without success to work the jab, but Dogboe was a bit too quick and evasive for the American.

Dogboe pounded Avalos with his weakening body shots, and the American almost hit the deck in the 4th round after a stinging blow into his body from Dogboe.

Dogboe continued his dominance in the 5th and 6th rounds, continuing to work the body of the 30-year-old Avalos, who looked tired and worn out at that point.

The dominance of the former WBO Super bantamweight world champion, Dogboe, finally paid off in the 8th and final round when he ultimately stopped Avalos.

A quick combination, which ended in a hard right hand, smack in the face of Avalos, and the referee had seen enough, waving off the fight, and handing Dogboe a TKO victory.

It was Dogboe’s first taste of victory since beating Japan’s Hidenori Otake in August 2018, and his first as a featherweight.