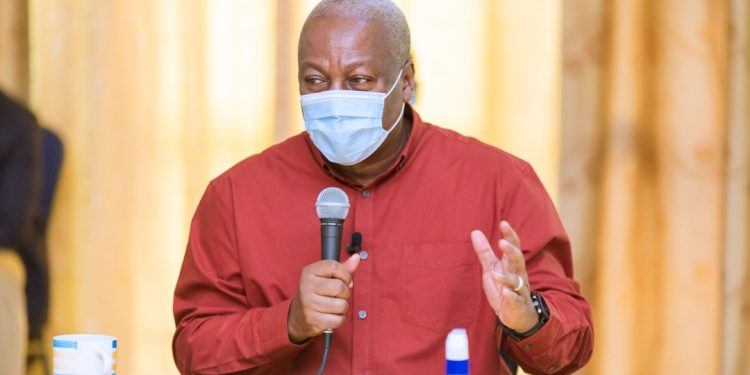 The flagbearer of the National Democratic Congress (NDC), John Mahama says he will not accept the Agyapa Royalties mineral agreements if he is elected President.

According to the former President, the deal looks shady and his government will not respect it.

In an interview on TV XYZ, John Mahama said the government is better of assigning the royalties to the Ghana Infrastructure Investment Fund rather than Agyapa Royalties which he said has been registered in a tax haven.

Parliament recently approved five agreements to create a special purpose vehicle in fulfilment of the Minerals Income Investment Fund Amendment which is yet to be assented to by the President.

Agyapa Royalties established by the government through the Minerals Income Investment Fund will operate as a private sector entity to raise funds from the capital market, both locally and internationally to help the government to finance infrastructural projects.

But John Mahama has kicked against the move.

“The government of Ghana, even though the royalties are ours, cannot control that company, meanwhile we have [special purpose] vehicles we can use here. We have the Ghana Infrastructure Investment Fund. If you assigned the gold royalties to the Ghana Infrastructure Investment Fund which is a 100 percent [government] entity, it can do exactly the same thing that you want Agyapa to do. If I become president, I will not respect that agreement. Ghanaians cannot accept this. We do not accept that government of Ghana should invest our royalties in an offshore tax haven,” he said.

Meanwhile, the former President has given indications that he will cause an investigation into the botched power agreement with Power Distribution Services (PDS) if he is elected as President in the 2020 polls.

The former President said there are many unresolved issues surrounding the deal which was cancelled a few months after its operationalization.

“If I become President we will investigate PDS especially when it is obvious that persons related to the President were involved in structuring the PDS deal,” he said in the interview.

Meanwhile, the Minerals Income and Investment Fund (MIIF) which formed the company in a statement defended the integrity of the agreement.

MIIF insisted that establishing Agyapa Royalties and giving it such a task is a “forward-thinking” endeavour, and is in the best interest of Ghanaians.

In general, Ghanaians will benefit because the capital raised “will finance strategic capital investments such as infrastructure and also mining in collaboration with local equity participants to spur socio-economic development,” it added.

Minerals Income Investment Fund is vested with the power, inter alia, to create and hold equity interests in a Special Purpose Vehicle (SPV) in any jurisdiction in furtherance of its objects, procure the listing of the SPV on any reputable stock exchange that it considers appropriate, and to assign or transfer all or any of its rights to minerals income to an SPV in furtherance of the objects of the Fund.