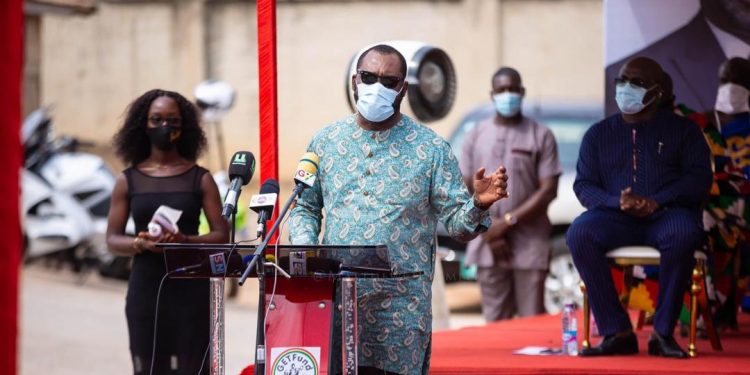 Education Minister, Mathew Opoku Prempeh has warned contractors working on GETFund projects in beneficiary schools that they risk losing their contracts if they do not return to work immediately.

The Minister, who was speaking in Kumasi at an inauguration ceremony of the GETFund Mid-Ghana Office also says all debts piled for contracts awarded since 2016 have been cleared by the current administration

“If the contract was awarded in 2017 and you put in your certificate, it takes about six weeks to get paid. Of course, it is much better than the years of unpaid contracts.”

“The Ministry of Education under my leadership has instructed the GETFund to make sure contractors especially those working in Senior High Schools who have been paid to go back on-site to complete the projects or come to the termination of its contracts and be re-awarded,” he warned.

Mr. Dominic Fobi, the Chairman of GETFund Board of Trustees, speaking at the same ceremony indicated that the GETFund will be better placed to manage public funds effectively through the decentralization of its offices.

“I’m particularly proud to note that GETFund has been a significant partner in the government’s drive to expand infrastructure in all Senior High Schools in Ghana to accommodate the double-track system. It is my hope and expectation that through the decentralization of its monitoring and evaluation activities which has occasioned the establishment of this and other zonal offices, GETFund will move from strength to strength and be better able to manage public funds entrusted in its care.”

The government rolled out its free SHS policy in 2017 to make accessibility for most Ghanaian students.

As a result, the numbers increased beyond the capacity of the Senior High Schools and thereby introducing the double-track system.

The government also committed to expanding the schools to make room for the numbers.

According to him, the amount will be used to build new facilities, expand and renovate existing ones.

“The Ghana Education Trust Fund has secured a $500 million facility for the construction of new schools and the expansion of infrastructure and existing ones,” the president added.