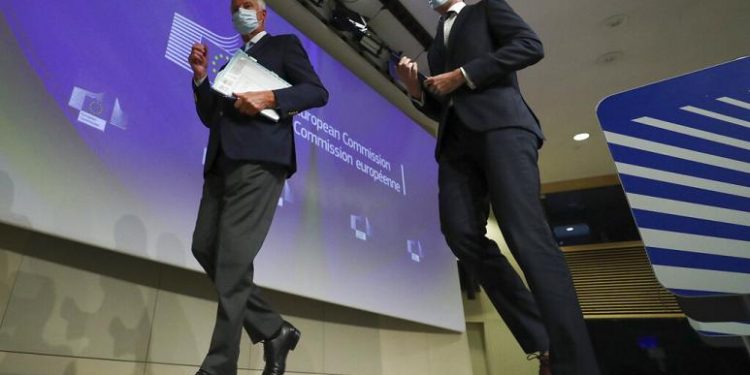 The German government said Monday a Brexit deal between the UK and the European Union was still possible and that it’s in the interest of both sides to secure one.

Britain left the EU on January 31 but the two sides are in a transition period until the end of the year and are negotiating their future trade ties.

The 27-nation bloc said any attempt by Britain’s Conservative government to unilaterally ride roughshod over its divorce agreement with the EU could jeopardize the prospects for a trade deal.

The trade discussions have made very little progress over the summer, with the two sides seemingly wide apart on several issues, notably on business regulations, the extent to which the UK can support certain industries and over the EU’s fishing rights access to British waters.

“For this, Britain in particular needs to move on the core issues of governance, what’s summed up as ‘level playing field,’ and on the issue of fisheries,” said German government spokesman Steffen Seibert during a news conference in Berlin.

“The German government continues to be convinced that it’s still possible and also that it’s in the interest of both sides to reach such an agreement (on Brexit), but of course one needs to reach an agreement with the United Kingdom as quickly as possible.”

If the UK walks away from the talks, the two sides would be heading toward a no-deal outcome that would see tariffs and other impediments to trade imposed at the start of next year.

The EU’s chief negotiator in the talks, Michel Barnier, said Monday that he will be seeking clarification from David Frost, his counterpart in the UK, on Tuesday “to better understand the government’s intentions.”

“We support Mr Barnier, the EU chief negotiator, who is conducting the negotiations on behalf of all 27 (EU member states), in his efforts to achieve an agreement in the short time available,” Seibert said.

Also on Monday, the EU warned the United Kingdom that any attempt to row back on its Brexit commitments could jeopardise a future trade agreement and put at risk hard-won peace on the island of Ireland.

It followed reports that Boris Johnson’s government is planning to introduce domestic legislation that would override provisions concerning Northern Ireland contained in the legally-binding divorce deal, which set out the terms of the UK’s departure from the EU last January.

The British Prime Minister has also threatened to pull the UK out of talks on the future relationship — which resume this week — unless a deal is struck by mid-October. A transition period keeping most current arrangements in place expires on December 31.

European Commission President Ursula von der Leyen said in a tweet that implementing the Withdrawal Agreement was “an obligation under international law and a prerequisite for any future partnership”.