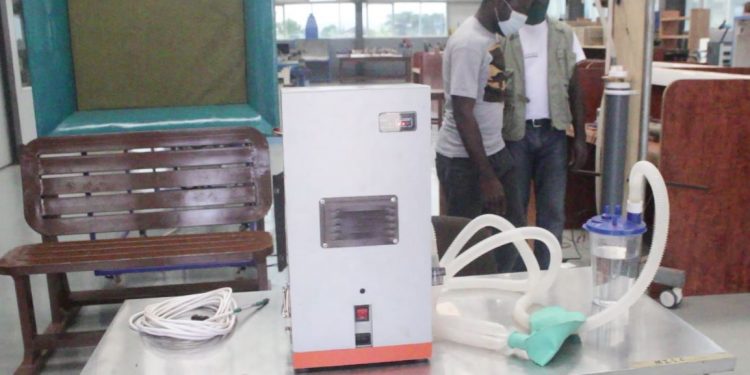 The sun was almost setting over the beautiful campus of Academic City College in Accra when I visited the school’s engineering workshop.

All the large equipment in the workshop gave an impressive introduction of the work done in the modest building, but that isn’t as impressive as the four medical ventilator prototypes being built in the workshop to fight the COVID-19 global health crisis.

These prototypes are set up for a test-run and in less than five minutes there is a live demonstration of how these devices work.

Indeed, they are only a few steps shy of being Ghana’s first locally-made low-cost ventilators, all made from low-cost materials.

An Ambu bag (self-inflating bag), battery packs, PVC hose and pipes, a humidifier, a car windshield motor, among other materials, are firmly fastened to wooden and metal frames as the mechanical process of producing air that could be pushed into the lungs of a patient is started.

The squeaky sound produced represents the hope of sustaining critically-ill COVID-19 patients who require such ventilators to stay alive.

The engineering workshop has been home to about a dozen young student-engineers who responded to a Facebook call for volunteers to build ventilators to support Ghana’s fight against COVID-19 in March 2020.

“I just put out the message on Facebook asking if there are any folks out there who would be interested during the lockdown to build a ventilator. The next thing I knew, messages were coming from all over the world with people expressing interest in this. The criteria were very simple, all you needed was to be enthusiastic about building new things,” says Prof. Fred McBagonluri, the provost and president of Academic City College, who is playing a lead role in the audacious project.

Standard ventilators are sold for between $25,000 and $50,000 per unit and they do not come cheap for a lower-middle-income country such as Ghana.

Besides the financial barrier, the global pandemic and its resultant scramble for such critical medical equipment has put them in short supply and not as easily accessible as before.

Prof. McBagonluri and his team were focused on building their prototypes from common locally-sourced raw materials within Ghana’s reality of resource constraints.

“We went looking for locally available materials; leather, wood, car parts and others. Our intention was to develop something where in case of a crisis situation, we can have immediate access to these things to use,” he says, indicating that the average cost of each unit will be $200.

A ventilator helps to pump oxygen into the body of patients via a tube that is inserted down the windpipe through the mouth.

The outbreak of the coronavirus disease which primarily affects the upper respiratory tract and leaves patients with symptoms including sore throat, dry cough and shortness of breath has made ventilators critical equipment, particularly because a significant number of patients who test positive for the virus have breathing challenges which could result in death.

Knowledge of the basic concept behind a standard ventilator is what is being replicated in the four prototypes built by the volunteer engineers over the last three months. With an Ambu bag, oxygen and a humidifier, medical air is produced to save critically-ill patients.

The mechanized process can be powered by either solar power, batteries or electricity from the mains.

“What I teach is that, as an engineer, in addition to engineering solutions, you develop stuff within the context of your reality, [using] what you have. If we are called upon as engineers and scientists to produce national solutions, an excuse like ‘we don’t have the materials’ is not an acceptable option,” McBagonluri says.

According to Prof. McBagonluri, the team intends to produce devices that are mobile and convenient enough to fit in cars.

He says they are aiming at producing the ventilators in large quantities for use in various rural health facilities across the country.

“We can still miniaturize this so that it can be prescribed just as we prescribe fire extinguishers for vehicles. If you chance upon an accident scene, you can pull this thing out and support a life until medical personnel arrive… You can have it in schools, hanging in the hallway, if somebody passes out, you can give them air. Older people can have them at home,” he notes.

Currently, Ghana has less than 200 hospital ventilators, some of which were recently procured amid the COVID-19 pandemic.

Although data from the Ghana Health Service, an agency under the Health Ministry, shows that very few of the country’s COVID-19 patients have required ventilators, the devices are also critical for saving the lives of patients with other medical conditions.

According to the 2018 Global Burden of Diseases report, respiratory diseases are among the top ten causes of death in Ghana.

Ghana records a significant number of lung-related diseases including asthma and bronchitis annually, some of which require ventilators.

In many of such cases that are reported, especially in rural Ghana, patients are transferred to bigger health facilities, however, not all of them make it to those facilities alive.

“Manufacturing ventilators at lower cost will help to increase patients’ survival rate thus reducing the rate of mortality from respiratory diseases. If the ventilators are going to be at the rural level, it is an even more brilliant idea. We’ll not place so many burdens on referral facilities. Imagine the precious time wasted just to transfer patients from somewhere in the Northern Region to Komfo Anokye Teaching Hospital (KATH) in Kumasi just to have access to ventilators,” says Benson Owusu Atuahene, a nurse at the Paediatric Intensive Care Unit of the Greater Accra Regional Hospital.

Fred McBagonluri and his team are yet to get the required approval from the Ghana Standards Authority to mass-produce the potentially life-saving devices.

While officials from the Authority have visited the workshop and expressed satisfaction with the work done so far, Prof. McBagonluri and his team are yet to formally present the prototypes for assessment towards final approval.

He explains that they are yet to incorporate a sensor into the device to ensure that the right amount of air is delivered into a patient’s lungs, but is optimistic that they will receive the required approval as soon as that is fixed.

“I want to take this into enterprise. There are many other medical devices that we can design. For us, there is no limit,” says Prof. McBagonluri.

Through these are baby to giant steps, the volunteer engineers are on the path to creating an innovative solution that can change the face of healthcare delivery in Ghana by presenting a lifeline with low-cost ventilators.

The writer, Jonas Nyabor is a journalist and works with Citi TV/Citi FM and citinewsroom.com. This work was produced as a result of a grant provided by the Africa-China Reporting Project at the Journalism Department of the University of the Witwatersrand. The opinions expressed and conclusions drawn are the author’s own and
do not represent those of the Project.