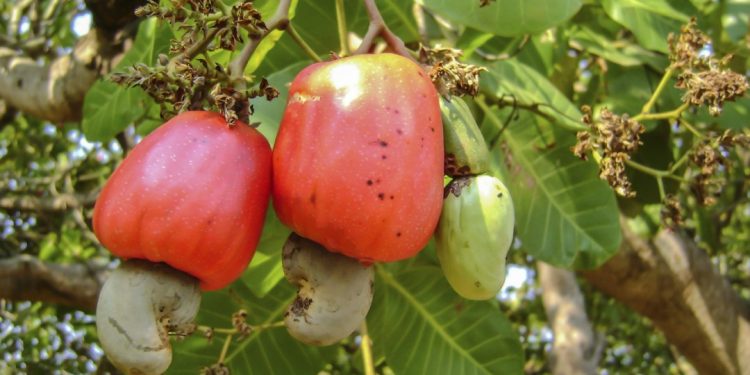 Ghana’s Cashew sector is not as developed as its cocoa sector. For over seven decades, as the world’s second, and at some point leading, producer of cocoa, Ghana has benefited enormously from her cocoa sector.

All these years, the cocoa sector has been the most well-organized, and properly regulated subsector of the Agricultural industry, with the Ghana Cocoa Board, established in 1947 to regulate the sector, playing a crucial role in this regard.

This explains why the cocoa sector remains the most developed subsector of the agroindustry with Ghana earning in excess of $2 billion in annual foreign exchange while also serving as major source of employment and income to about 800,000 families (according to AsokoInsight).

However, as the President of the Republic, Nana Addo Dankwa Akuffo Addo, indicated at the official inauguration of the Tree Crops Development Authority (TCDA)  in September 2020, there is the need for “a change in our country’s agricultural direction and its overreliance on cocoa”.

Ghana’s overreliance on cocoa has resulted in the underdevelopment of some very potential subsectors of the Agricultural industry and the cashew sector is one of such.

It is very necessary to mention that, Ghana’s cashew sector is one of the most promising in West Africa. Despite the low attention given to the sector in Ghana, per the records of the African Cashew Alliance (ACA), the sector has seen significant growth in the past decade.

Cashew production has grown from 22, 000 in 2009 to an estimated 105, 000 MT in 2020. Close to a million families in Ghana are directly and indirectly employed by Cashew, including farmers, buyers/exporters, and processors, about 40% of whom are women and children.

The country earned in excess of US$374million in foreign exchange from this sector in 2018 and accounted for 43% of total revenues of Ghana from all non-traditional exports for the year 2018. This growth, according to the Sector Organization and Advocacy Manager of the ACA, Ms. Reine Dehode, has “necessitated a proper reorganization and regulation of the sector”.

It is for this reason that the TCDA and the Cashew Council of Ghana (CCG) have been established. In a previous article (link to the article), an overview of the TCDA was given. This article, in a similar fashion, provides an overview of what the CCG is, the functions, and how it can contribute to the development of the cashew sector.

Background of the CCG

The Cashew Council Ghana was established by stakeholders of the cashew sector, with the support of the ACA, to become the apex body of the Ghanaian cashew sector. The Council was officially launched on Thursday, 15 October 2020  in Techiman, the Bono East Regional capital.

The CCG is a corporate body registered by the Registrar General’s Department with perpetual succession and can sue and be sued.

It is an umbrella body of all actors of the cashew sector with membership from the various players of the cashew value chain and is a platform for cashew actors to advocate for policy reforms. Cashew farmers, processors and traders are all represented on the Council.

The Secretariat of the CCG will be located in Sunyani, the Bono Regional capital.

Executive Secretary of the Association of Cashew Processors Ghana (ACPG), a member association of the CCG, Ms. Yayra A. Amedzroexplains that the establishment of the CCG was a requirement of the technical committee that set up the TCDA, the body that regulates tree crops in Ghana.

She explained that the committee directed the various tree crops subsectors to establish such bodies as the CCG to serve as umbrella bodies for each of the subsectors.

Distinguishing between the TCDA and the CCG, Managing Director of the ACA, Ernest Mintah, explains that while the former is regulatory in nature with legal powers to formulate and implement policies of the tree crops industry, including cashew, the latter is an advocacy group for the cashew sector. The CCG, according to him, is essential for the TCDA to work effectively.

“It is essential for all the crops to have such Councils as platforms. Otherwise, it will mean the TCDA will have to deal directly with farmers, buyers, processors, exporters of each of the six crops and that will be difficult,” he explained.

Functions/ Mandates of the CCG

Whereas the TCDA is the legal structure in charge of the regulation and development of production, processing, trading and marketing of tree crops, including cashew in Ghana; as the mother body of the various cashew actor associations, the CCG, according to its constitution, will maintain and present a unified front for the primary actors of the cashew sector in Ghana. By primary actors, the constitution refers to Producers, Processors and Buyers/Exporters.

For Mr. Charles KumahSampa, a local cashew processor and a member of the General Council of the ACPG, with this function, the CCG will serve as a mother organization for all actors of the sector.

Cashew producer and a Board Member of the TCDA, Chief Adams Tampuri, explains that the politics of international trade means that international policies are mostly favourable to sectors that are well organized, properly regulated, and developed. He believed the Board of the TCDA will work for hand in hand with the CCG and other subcommittees to implement policies in the interest of the industry.

This, ACA MD Mr. Mintah believes, is very crucial to the growth of the sector. The CCG according to him, will enable actors to advocate for favourable policies, that are in their collective interest.

It is important to note that, unlike the TCDA which is a private sector-led public institution, the CCG is a purely private sector umbrella body for the various value chain actors’ associations of the cashew sector in Ghana. It is therefore comprised of the Cashew Producers Association of Ghana (CPAG), the Association of Cashew Processors Ghana (ACPG), and the Cashew Traders Association of Ghana, in compliance with section 3 of the CCG constitution, which outlines the conditions of membership. Other Individuals or organizations who wish to be members of the CCG are required to first associate with a member organization.

The constitution of the CCG establishes an Executive Committee (EC) vested with the broadest powers to act in all circumstances on behalf of the CCG and to, among other functions, implement the mandates of the Council. The EC is composed of nine (9) members, made up of three (3) representatives from each member association, elected by the Annual General Meeting of the Council. The EC has three (3) executive positions: Chairman, Vice- Chairman and an Executive Secretary.

The constitution also establishes the CCG Secretariat to serve as the Council’s “seat of administration” and to manage its day to day activities.

What does the CCG bring on board? Conclusion

The CCG will play a very critical role in developing the cashew sector. From the actors’ point of view, the Council will serve as a mother organization for the various associations. President of the CPAG, Alex Owusu Adjei, believed, this “presents an opportunity for all actors to be included in decision making within the sector”.

This is especially important when it comes to the issue of pricing, which has over the years been a major problem among farmers, buyers/exporters, and processors. It, therefore, does not come as a surprise that, at the same meeting where the CCG was officially launched, three working committees were immediately constituted, including a pricing committee to among other things formulate a pricing module for cashew in Ghana.

It is important to state that, this committee is an extension of the TCDA’s subcommittee on pricing. This means that CCG’s pricing Committee, after extensive consultation with major stakeholders will present their cashew pricing module to the TCDA for further interrogation.

As was explained by Mr. Sah Kofi Eric, one of the ten cashew farmers on the CCG pricing committee in an interview, it is not within the mandates of the CCG to, on its own, dictate the prices of cashew in Ghana.

From the TCDA point of view, the CCG will serve as a team of technocrats for the Authority. With their knowledge of the sector, the CCG will complement the efforts of the authority by providing them with the real issues on the ground to help formulate and implement the right decisions.

It is important to conclude by emphasizing that the success of the TCDA in regulating the cashew sector, in particular, is intrinsic to how well the sector will be organized and that is what the CCG seeks to do.

The future of the cashew sector is now dependent on how collaborative and effective the TCDA and the CCG will be and how well these bodies can connect with actors of the cashew value chain and other stakeholders like the ACA and the Consultative International Cashew Council (CICC).