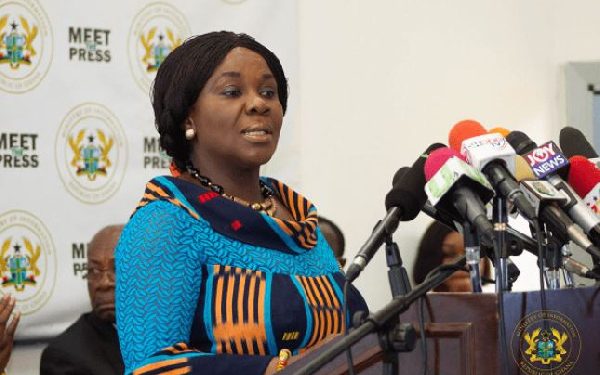 Ghana has not recorded a single case of cholera under the watch of the Akufo-Addo administration.

This is according to the Minister for Sanitation and Water Resources, Cecilia Abena Dapaah.

Speaking during the approval of the 2019 budget performance report of her ministry, Cecilia Dapaah explained that expansion of water supply to many homes is largely responsible for the positive gains since the governing New Patriotic Party (NPP) took over running of the country in 2016.

“We have increased access directly to water that is why we haven’t had any case of Cholera since his Excellency, the President assumed office. We pray that there will be no dysentery or cholera on any Ghanaian henceforth”, she said.

Cholera is an infectious disease that causes severe watery diarrhoea, which can lead to dehydration and even death if untreated.

It is caused by eating food or drinking water contaminated with a bacterium called Vibrio cholerae.

In 2016, more than 150 cholera cases were recorded in the Central Region with no known death recorded.

In order to prevent Cholera, the public should adhere to maintaining food and water safety by drinking safe water, washing fruits and vegetables well before eating.

Piped water sources and sachet may not be safe for drinking and should be boiled.

The public should always wash hands with soap under safe running water after using the toilet, before eating or preparing food, before feeding a baby, before serving meals and after taking care of sick persons.

Cholera could be prevented by keeping the environment clean by not defecating in the open but rather using a toilet facility and also urged the public to clean toilet and surfaces contaminated with faeces with disinfectant and keep uncollected rubbish covered.

Persons who show symptoms of diarrhoea should start taking Oral Rehydration Salt (ORS) immediately or report immediately to a nearby facility for treatment.