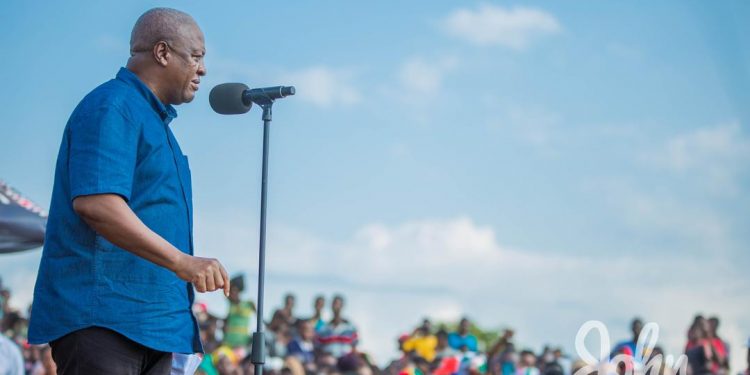 Mr. John Dramani Mahama, presidential candidate of the National Democratic Congress (NDC), has promised to upgrade the Tulaku Cattle Market, in the Greater Accra Region, into an ultra-modern livestock market.

He said the upgraded facility would have an abattoir, a cattle loading point, and a commercial area.

Mr. Mahama made the promise when he engaged cattle dealers at New Tulaku, near Ashaiman on day two of his five-day campaign tour of the Greater Accra Region.

The former President said his next government would ensure that the cattle dealers benefited from his $10 billion accelerated infrastructural plan, dubbed “The Big Push” if he is elected.

He said “The Big Push” will create jobs and drive entrepreneurial agenda for the country.

Mr. Mahama at mini rallies at Ningo, Prampram, Dawhenya, Kpone, Gbetsile, and Zenu said the main priority of his next administration was youth empowerment through jobs creation and appealed to the electorate to vote the NDC back to power to continue with its “unfinished” business.”

He said his previous administration constructed the Ashaiman main highway and other roads in the municipality, alleging that since he left office, nothing had been done by the current government on the road networks.

Mr. Mahama said his next administration would fix the Ashaiman roads; adding that a Technical Training Centre would be set-up in Ashaiman to train the youth in entrepreneurship.

He asked beneficiaries of the government’s COVID-19 stimulus package to ignore claims that the next NDC government would require them to pay back the money and urged them to vote for the NDC.

MUSIC REVIEW: Eno Barony preaches against spousal abuse in ‘Had I Known’

MUSIC REVIEW: Eno Barony preaches against spousal abuse in 'Had I Known'